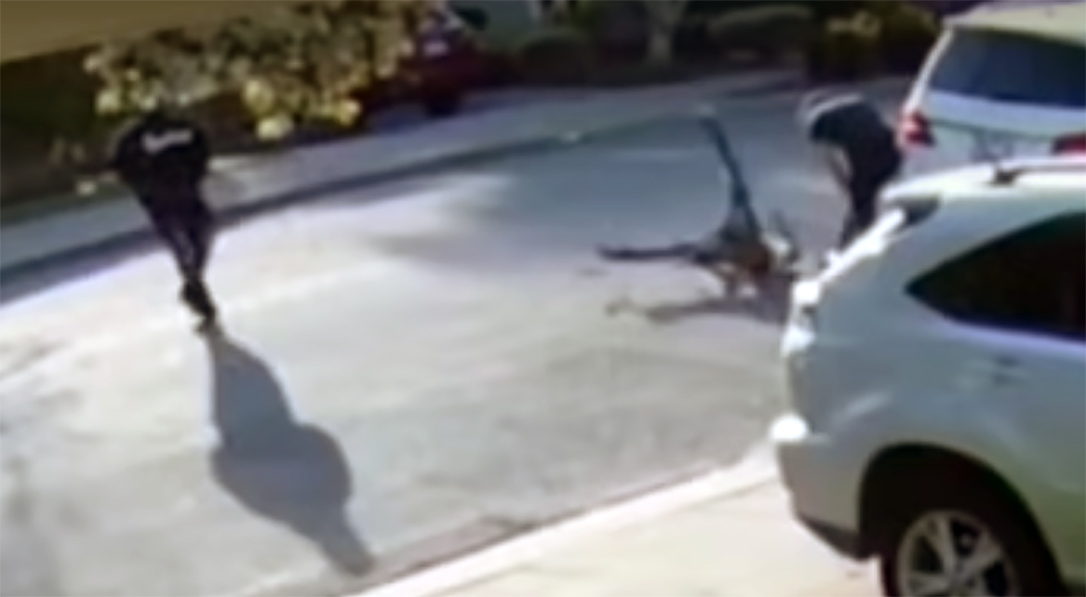 A home surveillance video caught a wild scene this week in San Leandro, Calif. A couple of kids attempted to carjack a man outside his home. But even at gunpoint, this guy was having none of it. The carjacking victim smacked the gun out of the suspect’s hands and violently body slammed him, ending the threat.

Police said suspects approached the victim with a gun, reported KRON 4. But footage shows the man quickly turn the tables on the would-be robbers. He appears to parry the gun away from his face. He then picks up and violently slams one of the suspects, who looks no older than 12. On the video, the kid screams wildly with terror as the victim hulks over him. Meanwhile, the other kid yells, “Hey, let him go.”

“It was very scary,” eyewitness Mary Aima told KRON 4. “We were actually home at the time, so yeah it was scary. A lot of the neighbors were a little alarmed.”

Police told KRON 4 that the same suspects, identified as minors, also attempted to rob a man at a Chase Bank ATM. Police then arrested three suspects, using the same getaway car, a few days later. Authorities released the minors to their guardians. Then inexplicably, they immediately attempted to steal another car in Oakland. Police arrested four kids, ages 11-14, during the final incident. So criminal masterminds they appear not to be.

Police said each case tied suspects to the scene via multiple surveillance videos, reported KRON 4. Additionally, the same getaway car showed up on camera in each incident.

More importantly, the incident illustrates the need to maintain constant situational awareness. Though the kids seemingly got the drop on the man, he managed to quickly turn the tables. He found his opening then, emphatically and violently, he exploited that opening. Granted, his opportunity likely arose due to the age and inexperience of the suspects, but it’s still an important lesson.