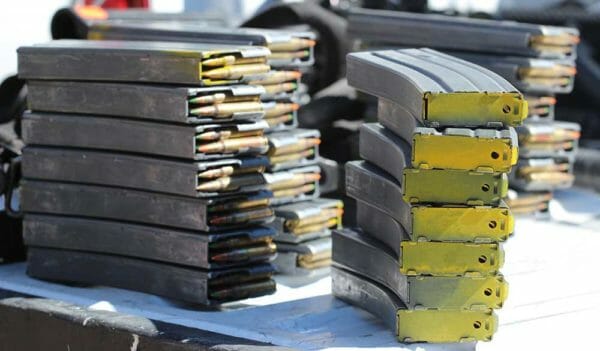 WASHINGTON, D.C. (April 15, 2021) — Today, Senate Democrats introduced yet another unconstitutional and outrageous bill attacking the right to keep and bear arms and personal property rights, this one aimed at banning standard capacity firearm ammunition magazines that are commonly possessed and used for lawful purposes by the millions.

S. 1108, introduced by the corrupt and power-hungry Senator from New Jersey, Bob Menendez, is just the latest attempt by authoritarian politicians to infringe upon American’s natural rights. The bill seeks to ban the sale, manufacture, transfer, possession and importation of constitutionally-protected magazines holding more than 10 rounds.

The ironically-named “Keep Americans Safe Act,” a shameless attempt at misdirection to conceal the intended government-enforced disarmament of the American People, would ban individuals from purchasing and possessing arms which are protected by the constitution. Worse, the bill specifically exempts law enforcement and other agents of the state, exposing the bill for what it is: A vehicle to disarm those that are not part of the government’s ruling class.

“Senator Menendez’s and Representative Deutch’s latest bills are nothing more than an outright assault on individual rights and the ability of people to effectively defend themselves,” said FPC’s Senior Director of Legal Operations Adam Kraut. “The notion that an individual does not need more than ten rounds to defend their homes, loved ones, and lives is grounded in fantasy. Should a bill restricting the ability of Americans to obtain magazines capable of holding more than ten rounds reach the President’s desk and be signed into law, FPC Law will respond aggressively, quickly, and forcefully.”

While this bill comes as little surprise to those that have stayed vigilant of Sen. Menendez and his repeated attempts at extinguishing the American public’s right to bear arms, it is nonetheless a legitimate threat against the American people. Menendez is joined in his crusade against the People by the likes of fellow tyrants House Speaker Nancy Pelosi, Sen. Dianne Feinstein, President Biden, and even Biden’s nominee for ATF Director, David ‘Waco’ Chipman, all of whom have expressed their support for such treasonous infringements.

FPC stands ready to guard against tyranny, and repeat our promise that we will take whatever actions are necessary, possible, and prudent to protect the rights and liberty of the People of the United States.

To join the campaign against gun control, please visit FPCAction.org. Those wishing to become a member of the FPC Grassroots Army and fight against future infringements at all levels of government can visit JoinFPC.org.