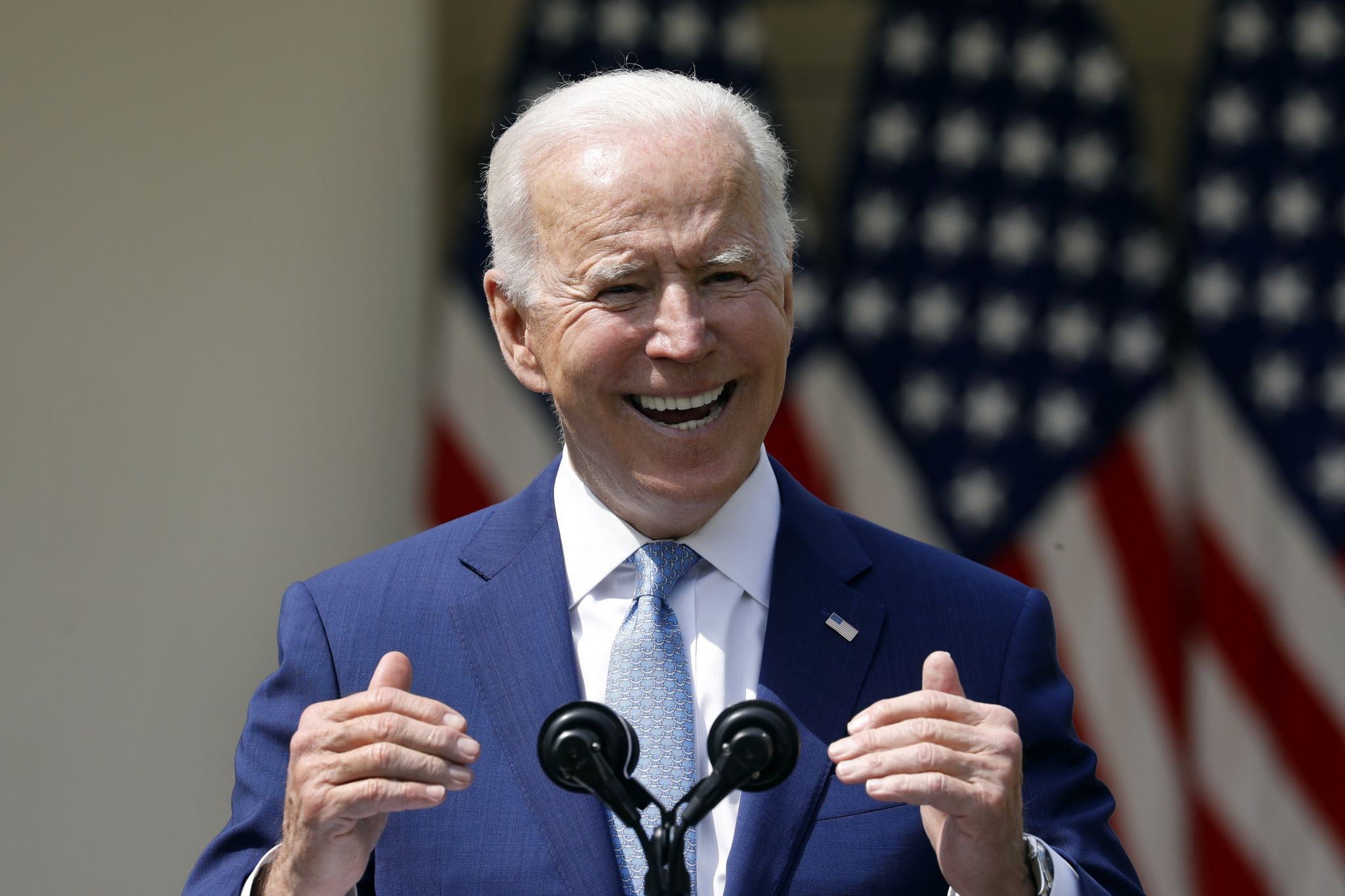 WASHINGTON — In the first two months of President Joe Biden’s administration, many of the nation’s most powerful gun violence prevention groups were dismayed with the leadership of the man they thought was going to be their strongest champion.

While they were receiving private meetings, they felt American gun deaths were placed on the back-burner by an administration single-mindedly pursing the COVID-19 pandemic. After multiple mass shootings and deaths in March, Alexis Confer, executive director of March for Our Lives, and Greg Jackson, national advocacy director at Community Justice Action Fund, flipped text messages back and forth saying “we’ve got to do something.”

So with leaders from Newtown Action Alliance, Guns Down America and Brady: United Against Gun Violence, they formed a coalition called The Time Is Now. Soon 80 other groups around the country signed on.

They agreed to publicly lean hard on Biden, whom they still viewed as an ally, to act. Now. And they sent him a letter demanding he pass a suite of executive actions, appoint a leader for the Bureau of Alcohol, Tobacco, Firearms and Explosives, and invest in community gun violence prevention programs.

Exactly, two weeks later, on Thursday, Biden announced six executive actions directly addressing those demands at an event in the White House Rose Garden, with more than 25 gun control advocates in attendance. On Friday, the Biden administration released their budget request, including over $200 million for the U.S. Department of Justice to work on gun violence and federal background checks.

“It didn’t happen magically,” said Po Murray, chairwoman of Newtown Action Alliance, a volunteer group formed after the 2012 school shooting at Sandy Hook Elementary School. “There’s been a lot of work with off-the-record conversations with the White House as well as very public pressure from the Time Is Now Coalition. We’re just thrilled that he took the first step.”

The episode demonstrates the growing influence of the numerous groups in the gun violence prevention movement as they increasingly knit together, raise more money and use tough tactics on a Democratic presidential administration and Democratic-led Congress that they see as the best shot at achieving their goals.

On the flip side, gun rights groups are not seeing the same cooperation and activism at the federal level, particularly as the country’s strongest gun-rights defending group, the National Rifle Association, is embroiled in a bankruptcy trial and a lawsuit from the state of New York to dissolve the group over alleged financial abuses. Membership in the major Connecticut gun rights group is up, but the organization advocates on state issues.

“From our side, we have very fragmented groups here and there from the pro-Second Amendment side,” said Diana Muller, a retired police officer and founder of the national pro-gun group DC Project. “Obviously the NRA has some black eyes and may be less effective right now.”

In interviews, founding members of the Time Is Now Coalition said their new informal organization is using new strategies and could be the backbone for a stronger fight to pass gun control legislation in the U.S. Senate, where firearm bills have stalled for years. They celebrated their win with a coalition call on Thursday night and were back on the phone again for a steering meeting Friday morning.

“What this coalition represents is a real change in how gun advocates and gun safety organizations work with administrations and leaders who are gun violence prevention supporters,” said Igor Volsky, co-founder and executive director of Guns Down America.

Volsky said gun violence prevention groups had “deep frustration” with the Biden administration because they campaigned on a strong gun control platform — advocating for tighter federal background checks and an assault weapons ban, among other things — but in the early days of office, “shied away from the issue.”

The White House did not respond to a request for comment for this article, but maintained in public statements through this period that it was committed to the issue and was evaluating what it could legally do with its executive authorities on gun violence.

Jackson, an activist and survivor of gun violence, said the coalition is now focused on “elevating the urgency” to do more now.

“Over the years, there have been many organizations formed out of tragedy and we’ve all been passionate about reversing that and addressing gun violence,” said Jackson. “But with this administration and this Congress, I think this is the first time we’ve all collectively come together to advocate for a comprehensive strategy and that’s not just one bill, not just one change… for the first time, all of our organizations are singing that same tune and we’re starting to see results because of that.”

Of course, some major gun control groups are not in the coalition, like Everytown for Gun Safety, the organization funded by billionaire Michael Bloomberg, which spent $1.3 million on lobbying Congress on gun control last year — by far the largest sum paid by any group, federal lobbying disclosures show.

Sandy Hook Promise, another organization formed after the Sandy Hook school shooting, also is not in the coalition. Sandy Hook Promise worked with the administration of President Donald Trump to draft and pass the Stop School Violence Act, which provides $125 million to schools across the country for violence prevention programs. Now, they’re in conversations with Democratic and Republican senators on legislation to change the federal background check system.

Nicole Hockley, a co-founder and managing director of Sandy Hook Promise, who lost her son in the shooting, said their organization could support a bill that did not require background checks for all private transactions, such as those between family members. Democratic Sen. Joe Manchin of West Virginia and some other lawmakers who support background checks on commercial transactions oppose the checks for private transactions, which are included in a Democrat-written bill recently passed by the U.S. House of Representatives.

She and her team are working on securing bipartisan support for legislation in the Senate — where 60 votes are needed to pass a bill under current rules.

“We don’t believe it is something that should be forced through,” Hockley said. “They are really productive conversations and I believe we are making headway, but there is still probably a few months’ work here.”

Other groups like March for Our Lives, Guns Down America and Newtown Action Alliance are advocating to end the filibuster, changing the Senate rules so that Democrats could pass gun legislation without any Republican votes in the Senate using their simple majority.

“We believe it that is going to be an uphill battle to get 10 Republicans to join the 50 Democrats to pass even the background check bill,” Murray said. “We have joined the Fix Our Senate Coalition to encourage the Senate Democrats to end the filibuster. So right our strategy has been to contact Democrats who have not co-sponsored the various legislative proposals, such as (Sen.) Chris Murphy’s background check bill, (Sen.) Dianne Feinstein’s assault weapons ban bill and (Sen. Richard) Blumenthal’s safe storage bill.”

Though just one aspect of spending by these groups, federal lobbying spending by gun control groups has generally increased since 2016, according to the Center for Responsive Politics, hitting a high of $2.3 million in 2019.

Lobbying spending by the NRA peaked in 2017 and 2018 at over $4.8 million and then dropped dramatically to $2.3 million in 2020, with the number of lobbyists employed by the organization falling as well, data from the the Center for Responsive Politics shows.

The NRA did not respond to a request for comment on Friday. But on Twitter, the organization said it is “ready to fight” the executive actions announced by Biden Thursday.

Biden’s new actions include directing the U.S. Justice Department to develop a rule so “ghost guns” — weapons built from kits — are assigned serial numbers and buyers are subject to federal background checks. He said the DOJ will also issue a rule to regulate certain firearm devices that can effectively turn pistols into short-barreled rifles, like the weapon used in a March shooting in Boulder, Colo.

Biden also directed the DOJ to publish model “red-flag law” legislation for states to implement to help courts temporarily remove guns from people who pose a threat to themselves or others and release an annual report on firearm trafficking, the first since 2000. Biden is appointing a gun-control advocate and former federal agent, David Chipman, to lead the Bureau of Alcohol Tobacco and Firearms. The administration will also invest in community violence intervention programs.

“These actions could require Americans to surrender lawful property, push states to expand confiscation orders, and put a gun control lobbyist to head ATF,” the NRA wrote. “Biden is dismantling the 2nd Amendment. It’s time to STAND and FIGHT!”

Muller said her organization the DC Project does not do outreach to the Biden administration, but sends 50 women, one from each state to the Capitol each year to speak to members of Congress about maintaining gun rights.

“Our goal is just to be a counter voice to the anti-gun women and educate, inform, influence our friends, our families, our communities as to the other side of the narrative that they are fed continuously,” she said. “Safety is achieved through education not legislation. If these proposed gun laws worked, then Chicago and Baltimore and St. Louis should be the safest cities in America and they are not.”

In 2021, 11,555 people have died from gun-related incidents, about half from homicides and half from suicides, according to the Gun Violence Archive. Also, 8,991 people were injured by a gun.