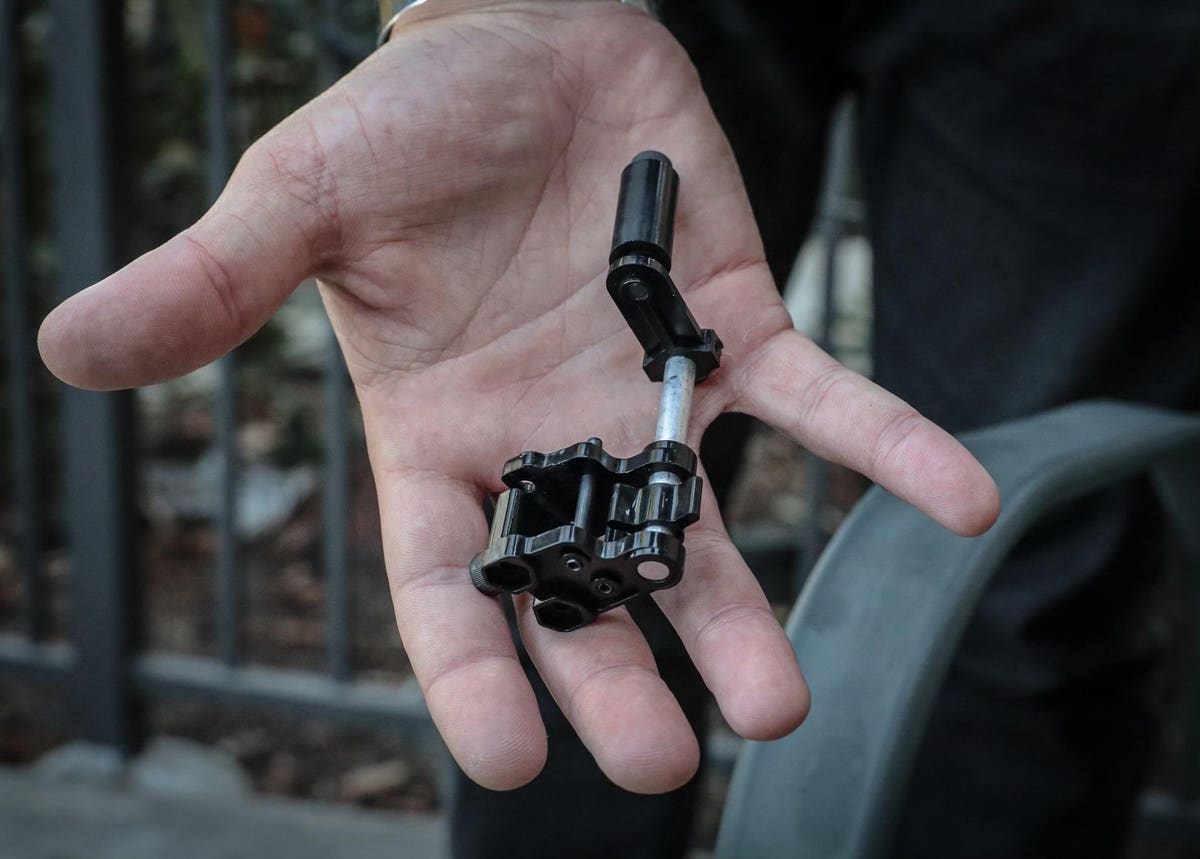 But unlike his predecessor President Trump, a Republican who banned bump stocks, Biden has not announced plans to crack down on other devices that speed up the rate of fire. Gat cranks and binary triggers can be installed in semiautomatic rifles and even pistols to speed up the rate of fire to mimic full automatic machine guns. They’re available and legal in most states.

While gat cranks and binary triggers don’t work the same way as bump stocks, they achieve the same result: artificially speeding up the rate of fire.

A gunman used multiple AR-15s outfitted with bump stocks to commit the deadliest mass shooting ever, in Las Vegas in 2017. The gunman had turned his high-rise hotel room into a sniper’s nest overlooking the Harvest music festival, killing 58 people and wounding hundreds with a rapid staccato of gunfire, even though he was using semiautomatic rifles instead of full auto.

Bump stocks harness the recoil of a rifle to bump the trigger at a much faster rate than a finger pull, speeding up the rate of fire. Gat cranks are hand cranks that are mounted to the trigger guard of a semiautomatic rifle or pistol that would normally fire one shot with each pull of the trigger. Instead of manually pulling the trigger with the index finger, the shooter turns the hand crank, which pulls the trigger and fires the gun at an artificially faster rate.

GatCrank is a family-run Texas business that has sold more than 2,000 gat cranks since owner Josh Dempsey purchased the company in November 2020, during a record year for gun sales. He said that GatCrank is launching a new product on April 1, a $100 aluminum version of the $60 plastic crank that’s already on the market.

“It’s a fun toy to use at the range,” said Dempsey. “It’s not meant to save your life.”

The device can be used with assault rifles, which the gun industry prefers to call modern sporting rifles, and can also be fitted to semiautomatic pistols, including Glocks.

The company website describes the GatCrank as a “rapid fire trigger actuator perfect for putting multiple rounds on target quickly and efficiently.” The company notes that “going to the range or plinking in the woods is more enjoyable at three shots per rotation of the crank.”

Franklin Armory, a gun manufacturer in Nevada, makes and sells binary triggers, which are fitted to assault rifles to speed up the rate of fire by shooting not just when the trigger is pulled, but also when it is released. The company showcased its binary triggers at SHOT Show 2020, the annual gun industry event in Las Vegas which is hosted by the National Shooting Sports Foundation, which is based in Newtown, Conn.

Franklin Armory bought the Bushmaster brand from Remington during the gunmaker’s Chapter 11 process last year. Franklin Armory has not replied to messages from Forbes about its plans for the Bushmaster, a brand of AR-15 that was used in the notorious 2012 mass shooting at Sandy Hook Elementary School in Newtown.

The Sandy Hook shooting, where 26 first-grade students and educators were killed, prompted former President Obama to try to enact more restrictive gun control on assault weapons. But Congress didn’t pass the bill in 2013.

Trump’s bump stock ban was the only form of gun control measure that he implemented, and the Supreme Court upheld the ban last year. To some people in the gun community, the ban was a letdown from a president they supported, who was endorsed by the National Rifle Association.

“It is unfortunate and very sad about what happened in Las Vegas, but that shouldn’t be a reason to ban that,” said Dempsey, a former police officer and ex-Marine.

Bump stock inventor Slide Fire Solutions shut down its business in 2018, even before the ban was implemented. Existing bump stocks are supposed to be destroyed or turned into the Bureau of Alcohol, Tobacco, Firearms and Explosives. But the gat cranks and the binary triggers are still legal. According to federal law, the devices are not considered full automatic weapons, and neither are the guns they’re attached to.

“The GatCrank accessories do not appear to alter semiautomatic firearms to function as machine guns and would not be ‘machineguns’ as defined,” said Erik Longneck of the Bureau of Alcohol, Tobacco, Firearms and Explosives. “However, they would still subject to any applicable state or local ordinances.”

The call for gun control has grown louder after recent mass shootings in California on March 31, where four people were killed including a child, in Georgia on March 17, where 8 people, including six of Asian descent, were killed by a gunman at Atlanta-area spas, and in Boulder, Colorado, on March 23, where 10 people at a grocery store were killed. Biden’s plan is to ban assault weapons like the AR-556 pistol from Sturm, Ruger that was allegedly used by the Boulder gunman.

Dempsey said he’s not worried about the specter of gun control, which only seems to accelerate his sales. That’s what happened with bump stocks, according to Al Tawil, owner of Towers Armory, a gun store and range in Oregon, Ohio.

“When something goes into effect, they’ll blow off the shelf,” said Tawil, referring to the impact of impending gun control measures on sales. “Bump stocks, nothing really happened till it was banned, then they were so rare.”

Gun sales have been surging ever since the coronavirus swept through America in March 2020, prompting consumers with stimulus checks to buy guns for self-protection amid rising crime and outbreaks of civil unrest. Asian-Americans have been arming themselves against the threat of hate crimes. Others are buying AR-15s ahead of Biden’s proposed crackdown.

The rush on guns has led to a nationwide shortage of ammunition, prompting gun retailers to ration sales. Some gun owners have taken to reloading their own ammunition, but this doesn’t help because the raw materials are in short supply, too.

The ammunition shortage has created a more immediate threat to Dempsey’s business than gun control, since the gat crank is best enjoyed when shooting through boxes of ammunition that have become expensive and hard to find.

“I have a lot of potential customers who say, ‘Well, ammo’s high, I can’t afford it, so I’m not going to buy it right now,’” he said.