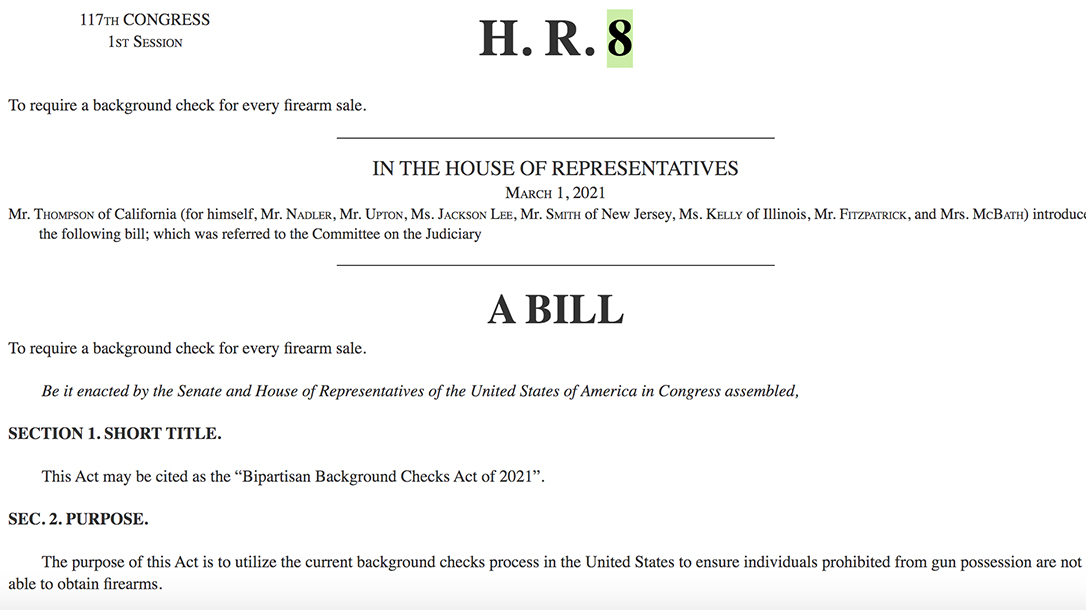 The anti-gun Congress finally shot its first big gun across the bow Thursday. The House of Representatives passed the so-called Bipartisan Background Checks Act of 2021. It comprises the first serious anti-gun legislation to achieve the significant benchmark under the new Congress.

The bill passed 227-203 and would expand background checks for all firearm sales or transfers. Democratic members of Congress congratulated each other following the bill’s passage. It will now head to a Senate turned blue in the recent election.

“We’ll have the good sense to have had this bill twice and in the past when they send it over to us last time, it went into Mitch McConnell’s legislative graveyard. The legislative graveyard is over. H.R. 8 will be on the floor of the Senate and we will see where everybody stands,” said Senate Majority Leader Chuck Schumer, reported CNN. “No more thoughts and prayers. A vote is what we need. A vote.”

“There have been ongoing conversations off and on all the way through. And, you know, I think Sen. Schumer was clear that the initial vote would be on H.R. 8, and then we would talk about what might be advisable and necessary to pass it,” Blumenthal said, reported CNN.

“Members of the House of Representatives made it clear today, with bipartisan support, where they stand on preventing a countless number of deaths from happening again in the future,” said Biram Lemek, Executive Director, Brady PAC. “Between now and 2022, Brady PAC will make sure every voter knows and doesn’t forget who did and did not vote for this lifesaving piece of legislation that 90% of Americans support.”

So begins the most coordinated attack on the Second Amendment in America’s history. It’s gonna be a long four years.