VZ Grips: Building A Better Handgun HandleUsing A .410 Shotgun for Home DefenseFPC 2A Legal Update – 12/1/21North Texas Public Safety Unmanned Response Team (NTXPSURT) adds complete regional interoperability with DragonForceIt’s 2021 in America, so go give blood for school shooting victims in the parking lot of a gun storeHow NOT To Point a Gun!BlackPoint Tactical: Holsters For Any MissionCalifornia gun law headed to Supreme Court?How California got tough on gunsRuger Security Six
Gun And Survival
Skip to content 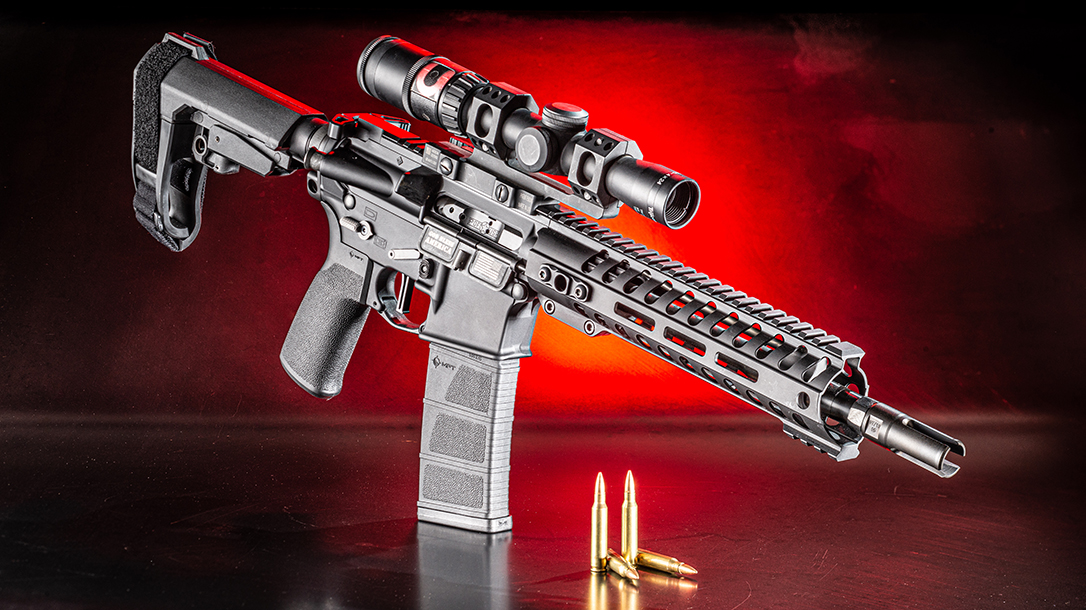 The minuteman—our fledgling nation’s first responder, ready at a moment’s notice to defend his country, family and freedom. It’s an apt name for the newest pistol coming to us from the Patriot Ordnance Factory, or POF-USA. This new AR pistol would make a first-class home- or vehicle-defense gun. While today’s shooters have many options when it comes to AR pistols, the POF-USA Minuteman stands head and shoulders above the competition.

Frank DeSomma, POF-USA’s owner and self-described patriot, spent a lifetime in aerospace engineering and is no stranger to lightweight alloys, friction- and heat-reducing coatings and cutting-edge CNC machining. When DeSomma turned his attention to firearms and applied lessons learned to Eugene Stoner’s design, the results are nothing short of amazing. The Minuteman is not just another AR pistol.

Just before Christmas of 2019, I made the two-hour drive from my home in Tucson to POF-USA’s new 30,000 square foot manufacturing plant in Phoenix. After receiving a tour of the new facility and its indoor firing range, Cody DeSomma, Frank’s son, showed me a few new products that had yet to be introduced. One of the guns that intrigued me the most was the Minuteman pistol. When I left POF-USA’s headquarters that day, I had a Minuteman chambered in 5.56mm NATO tucked under my arm. The gun is also available in .350 Legend and in a carbine version with a 16.5-inch barrel.

The Minuteman is a direct-impingement semi-auto AR pistol and has a 10.5-inch barrel, free-floating handguard and match-grade trigger. Those are basic descriptions of the gun and its components—nothing too radical here until we take a closer look.

For instance, even though the gun uses a direct gas impingement system, DeSomma engineered it to use a carbine-length gas tube to reduce the port pressure, thereby increasing component life. But you’ll find even more innovation on the Minuteman’s bolt carrier group. As a complete and utter fail-safe, DeSomma designed the stainless steel gas key to be dovetailed into the carrier and secured with a staked screw. Both the bolt and extractor are nickel plated for corrosion resistance, and the firing pin is chromed. POF-USA’s patented roller cam is also incorporated on the bolt carrier. It replaced the square key of Stoner’s design with an NP3-coated roller head that reduces friction and drag and prevents the scoring of the upper receiver, extending the life of all the parts including the receiver.

DeSomma also designed the POF-USA anti-tilt buffer tube, which actually cradles the rear of the bolt carrier when it is in battery. His design prevents premature wear from buffer tilt, and the buffer detent pin actually keeps the tube from unscrewing. In the case of the Minuteman pistol, the SB Tactical SBA3 brace is attached to the buffer tube and has six positions.

POF-USA has its barrels 5R rifled with a 1-in-8-inch RH twist and cuts the chamber to NATO specs. Barrel blanks are profiled in-house and nitride heat-treated for corrosion resistance and a longer life. The Minuteman uses DeSomma’s E2 dual-extraction technology, which involves cutting four narrow channels into the neck area of the chamber. When the gun is fired, a small amount of gas vents on the casing’s shoulder, breaking the seal between the chamber and case, and reduces the amount of work the extractor must do. The muzzle of the barrel is threaded at 1/2×28 and is outfitted with POF-USA’s effective three-prong flash suppressor.

The Minuteman also uses DeSomma’s 3-inch-long heat-sink barrel nut. The aluminum part encompasses the chamber and throat area of the barrel. Most of the heat resides here, and the radially finned part dissipates heat 17 times more effectively than a steel GI barrel nut.

POF-USA manufactures its free-floating handguards in-house, and the Minuteman uses a shortened 9-inch version of the popular Renegade handguard. It features an uninterrupted top rail and M-Lok cuts on three sides with a piece of Picatinny rail at the 6 o’clock position for bipod use. There are two spots, one on each side of the handguard, for QD sling mounts in addition to the rear QD sling swivel plate located at rear of the lower receiver. The handguard’s small diameter makes it comfortable to hold.

Trigger pull on my test sample measured at just 2.75 pounds, though POF-USA’s website says the flat-faced, single-stage, drop-in trigger should register at 3.5 pounds. There is zero take-up before it breaks crisply and nearly zero overtravel. The trigger has a firm reset and is perfect for rapid-fire shooting. An aluminum housing with urethane feet sandwiches the unit. The hammer, trigger and disconnect are all EDM machined from A2 tool steel and then nitride heat-treated for strength and corrosion resistance. It comes with KNS Precision stainless steel, non-rotating, anti-walk pins for a consistent pull, shot to shot.

I fired the Minuteman in early January, and even in southeastern Arizona, less than 20 minutes from the border, I passed puddles that had frozen overnight. When I arrived at my shooting spot, the temperature was just 35 degrees Fahrenheit. Thankfully, over the course of the next couple hours, the temperature rose about 20 degrees. Even more fortunately, the winds that day were under 5 miles per hour. As much as I love to shoot in this spot in the desert, it’s rarely as calm as it was that day, and that allowed me to shoot some very nice five-rounds groups with the Minuteman. It took me just a couple minutes to set up my portable DOA Tactical shooting bench and chronograph.

To test the gun for accuracy, I used a Trijicon AccuPoint 1-4x24mm (Model TR24R) mounted in an American Defense Manufacturing Ad-Recon scope mount. I fired all groups with the Trijicon’s power set to 4X. Rather than use a rifle rest as I normally do, I utilized the rail at the bottom of the Minuteman’s handguard and attached my Warne Precision Bipod. It adjusts with one hand, and its leg height adjusts from 6.9 to 9.1 inches. It has a 22-degree total cant and 44-degree pan, which can be disabled. I rested the bipod’s legs on the DOA Tactical bench top and fired all of my groups from a seated position. The group sizes posted in the accuracy chart reflect the smallest of at least three groups fired with any particular ammo.

My single best group came with Federal Premium 69-grain Sierra MatchKing BTHP rounds, measuring just 0.87 inches. The Minuteman’s trigger was just a joy to work with. I especially liked its flat-faced configuration. But it was the crispness of the trigger that made breaking the shot so predictable and consistent. As I mentioned earlier, it exhibits zero take-up and zero overtravel, as well as its positive reset, making the Minuteman especially easy to fire rapidly.

I brought along my MGM BC-C Zone steel target and set it up at about 20 yards. The target replicates an IPSC target with the D zone removed. It utilizes 0.38-inch-thick Hexalloy 550 steel that hangs at a 27-degree angle to deflect projectiles into the ground. I’ve shot mine with everything up to a .308 rifle, and it still looks like new. Dialing the Trijicon AccuPoint scope down to 1.25X, I used it as a reflex sight. I wanted to see just how quickly I could hammer the target and used my PACT electronic timer to measure the splits, or time between shots.

Despite my cold, numb fingers, I was able to fire the Minuteman very quickly with splits averaging around 0.17 seconds. That’s about as quickly as I can shoot anything. But I have no doubt that a talented shooter could get their splits down under 0.14 seconds while maintaining hits. While I was hammering my MGM target, I couldn’t help but think how devastating the Minuteman would be within the confines of a home. Can you imagine the thought process of a home invader when met with the muzzle blast and fireball of the 10.5-inch barrel?

I had a lot of fun shooting the Minuteman. Throughout the testing, it proved completely reliable, and I had no stoppages or problems of any kind. It possesses sub-MOA accuracy and the reliability needed to defend one’s country, family and freedom. The Minuteman comprises the sum of Frank DeSomma’s innovations. Meticulously machined and painstakingly assembled, it offers users a lifetime of hard service. Unfortunately, Frank DeSomma died in traffic accident on June 20, 2020. His passion for this country and the firearm industry will be missed, as well for his companionship.  For more information, visit pof-usa.com.

This article is from the February-March 2021 issue of Personal Defense World magazine. Grab your copy at OutdoorGroupStore.com.

California gun law headed to Supreme Court?
Using A .410 Shotgun for Home Defense
Putnam County Should Continue to Support Our Second Amendment
Winter Camping in a Canvas Tent with a Dog and a Woodstove.
Primitive fishing gouge.