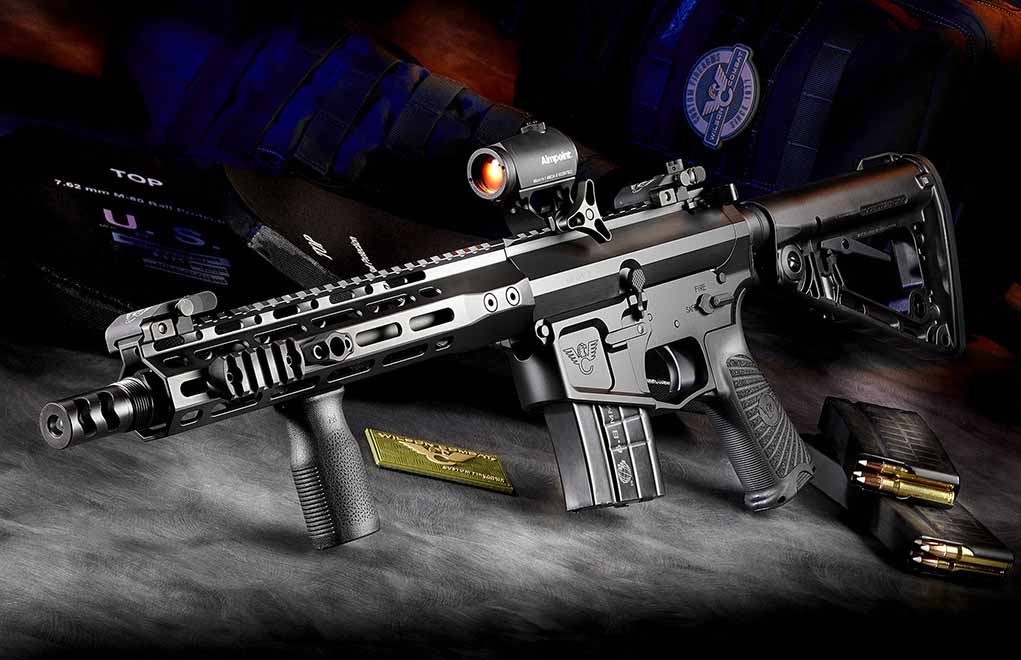 A true intermediat cartridge that delivers a punch, look no further than the 6.8 SPC II.

The 6.8 Remington SPC doesn’t get its due in the pantheon of AR-15 cartridges. It’s a shame. The 6.8 is a regular do-all. A hunting whiz for varmints and medium-sized game. Absolutely on target at close to medium range. And fitting nearly seamlessly—there are a few tweaks—into the everyday, average AR platform.

It would seem shooters with a yen for a jack-of-all-trades rifle would jump all over the 6.8 SPC. So, why aren’t they? While there are staunch devotees, but a troubled past put it in the shadow of the standby 5.56 or the specialist 300 Blackout. However, with new life breathed into the 6.8 the past 12 or so years, the intermedia round definitely deserves a second look.

A typical refrain for AR-inspired cartridges, the 6.8 SPC came about as a military venture. In the early days of the War On Terror, special operators were displeased with the performance of the 5.56 NATO. Reports rolled in of Taliban fighters killing or wounding U.S. soldiers after being shot multiple times with the 5.56. Not good. What was required was a cartridge that put the enemy down on the mean streets of the Middle East and kept him there. At the same tick, utilized the compact M4 platform.

Honestly, not the easiest of tasks. The AR-15 family of arms was specifically designed around small-bore, high-velocity cartridges—initially the .223 Remington, later the 5.56. Incorporating an option with more of the mythical “stopping power”—read a larger caliber bullet—is tricky. Though, in concept, the 6.8 SPC provided an elegant solution.

A joint effort between Remington and the U.S. Army’s Marksmanship Unit (top-shelve competitive shooters that just don’t lose) came up with an intriguing solution.

First off, they turned to the defunct .30 Remington case for the new cartridge’s parent. While the rimless .30-30 sports a larger case head (.422 inch) than the 5.56 (.378), it a smaller diameter than, say, the 7.62×39 (.445). The advantage in this is bolt-head dimensions. Yes, it required an upgrade from the standard M4, but its breadth wasn’t so great as to inject structural integrity issues.

As to caliber, fitting for the 6.8 SPC, it was the middle ground. South of .30-caliber, the U.S. Military has long known the superior terminal performance of the 7mm. On the other side, extensive accuracy testing in the 6.8 project found 6.5-calibers offered greater accuracy. The 6.8 rode the line at intermediate ranges, proving as on target as the smaller caliber, yet as damaging as the larger. Potent mix.

Thus the 6.8 SPC was born. All an M4 required was a new bolt head and caliber-specific magazines and it was right as rain. Except it wasn’t.

While the pieces were there for a more effective intermediate cartridge, the execution was not. In short, the chamber was fudged in a rush to get the brand-new hot shot into military testing. The bug, free bore.

On the original Remington design, there was .050 inches of it. Combine with the original twist rate, 1:10, pressure was an issue. Various corners of the 6.8 world claim they were minor, perhaps 200 psi over the 55,000 psi limits of AR systems. Nevertheless, military brass are sticklers for specs—especially since the Vietnam M16 debacle—therefore the pressure issue was a bridge too far.

Remington’s solution was nearly as bad as the problem—underload the cartridge. Eesh, who wants a system that can’t live up to its full potential? Apparently not the military. While there are reports of the 6.8 SPC seeing action, and acquitting itself well, it was soon given the “better luck next time” treatment by the military.

Worse yet, the hubbub of the development of the cartridge spread around the greater gun world. Gunmakers are businesses, and each wanted their slice of the 6.8 SPC pie. Except rifles began rolling out before the cartridge was officially sanctioned by the Shooting Arms and Ammunition Manufactures Institute (SAAMI). A very big problem.

With so many firearms floating around with the faulty chamber, the governing body had no recourse but to sanction the flawed design. This isn’t to say the original 6.8 SPC design won’t function; it does, but only safely with the downloaded ammunition that doesn’t put the rifle and subsequently shooter in peril.

It might have spelled the demise of the cartridge, once folks caught on to its underperformance. Thankfully, help was on the way.

If a shooter goes out today and purchases a brand new 6.8 SPC rifle, most likely it isn’t the original design. Instead, they’re getting a 6.8 SPC II—it will say so on the barrel roll mark. Essentially, it’s the ironed out version of the original design. It was also a labor of love by a number of individuals and companies who had a belief the cartridge could be more.

In retrospect, the fix was pretty simple—.050-inch of free bore to be exact. That was what was tacked on, making the grand total of the 6.8 SPC II’s .100 inch. Additionally, 1:11 twist rate was incorporated in most new rifles. This isn’t universal, short-barrel 6.8 SPC II rifles and pistols are much faster—they need to be to stabilize the bullets. But by-and-large, the 1:11 is what’s used in most carbine-length guns.

Problem solved, it should have been clear sailing. Except that pesky original design loomed over the improvement. This time with ammunition.

Hot factory loads for the 6.8 SPC II are few and far between. That’s because it’s a maverick of sorts. While almost every new gun chambered thus utilizes the improved design, the original is what’s on file with SAAMI. Liability laws what they are, not many ammo makers have jumped at improving their loads with the chamber.

There have been exceptions. Silver State Armory (now owned by Nosler) is the 6.8 SPC II’s oldest cheerleader. In turn, the company turned out loads that brought out the cartridge’s best. One of its most notable, a load boasting a 140-grain Berger VLD (Very Low Drag) bullet that it claimed stayed supersonic past 1,000 yards. Impressive, given inherent case capacity limits.

Yet, most shooters can expect much more moderate specs from store-bought ammunition. Most factory loads are topped with 85- to 120-grain bullets, sent from the muzzle at anywhere from 2,300 fps to 2,600 fps.

In all honesty, for many this is more than enough for most purposes. At the same tick, it’s not everything the 6.8 SPC II can offer. Thus the reason why handloaders have fallen in love with the exclusivity of the cartridge. They’ve got the stuff to make it sing.

For the most part with most loads, handloading improvements net 100 fps to 300 fps more velocity than factory ammo and expands bullet selection up to 140 grains. Though, there are exceptions. The more daring have pushed the limits of the cartridge milking as much as 3,000 fps plus at the muzzle, which is screaming.

Yet, shooters should temper their overall expectations over the 6.8 SPC II. Simply because hot loads exist, doesn’t mean its purpose has modified. It remains an intermediate cartridge.

Limited by its mission parameters, what should shooters expect from the 6.8 SPC II? Not a long-range round. True to its roots, even with most handloads, its maximum effective range lingers around 600 yards in most circumstances, but it operates best 300 yards in.

What’s at issue is a pull between ballistic coefficient and case capacity. Lightweight 85-grain bullets are more than capable of being pushed in excess of 3,000 fps, but inherently are not good at bucking wind resistance. Heavier bullets are good a cutting the air, but take up space in the case, thus have less propellent pushing them.

In turn, a wall is hit generally around 700 yards. At this point, the bullet goes sub-sonic and it’s ballistics go to pot. But even out to 500 yards and moving faster than the speed of sound, the 6.8 isn’t the flattest-shooting critter.

The trajectory graph (above) provides a good example. The two “HL” loads are handloads at maximum velocity, per Accurate Powder’s reloading data. The third is a Hornady factory hunting load. Across the board, the loads are relatively flat out to 300 yards, but by 500 yards have fallen by 60-inches or more—the 90-inch range for the heavier bullets. Furthermore, in each case, the loads go sub-sonic by around 700 yards. The 85-grain load maintains supersonic flight to a tick past 700, but the heavier two peter out around 600 yards.

This raises the question, why not just 300 Blackout? It’s renowned for its close and short-medium range effectiveness. True enough, and if it were simply a factory-ammo game this proposition would hold true. However, add handloading in and shooters get more bang for their buck with the 6.8 SPC II.

Another example. Take two handloads, both taken from Accurate Powder data, with the same type of bullet for each cartridge—a 110-grain Hornady V-Max. Loaded for maximum velocity, the cartridges stay neck-in-neck out to 200 yards, with around a 2-inch difference in drop. By 300 yards, the difference has grown just shy of 10 inches with the 6.8 SPC clearly with the flatter trajectory. Plain and simple, the SPC has more potential to reach out and fulfill its intermediate role.

With its military career DOA, another group deserves credit for boosting the 6.8 SPC II’s fortunes—hunters. Most famously, hog hunters.

Texas pig poppers are the folks who’ve most buoyed the cartridge in recent years, reaping porcine like ripe wheat with the 6.8. The caliber has improved cross-sectional area compared to all AR-15 cartridges, outside of the 300 Blackout, which means even before bullet expansion it punches larger holes.

Hunting-wise, the cartridge that gives the 6.8 SPC a run for its money is the 6.5 Grendel, which sits on the cusp of being a legitimate long-range option. It’s also equally as talented at close- and mid-ranges. However, to enjoy everything the Grendel offers, a barrel north of 20 inches is recommended. Not so with the 6.8 SPC. A majority of rifles chambered for the cartridge are carbine-length or pistol.

Those who avoid humping extra weight on the hunt appreciate this advantage. As do the defensive-minded. While not as suppressible as the 300 Blackout, the 6.8 SPC is comfortable in short-barreled configurations. With improved velocities—the determining factor of bullet expansion—the SPC is a mean close-quarters option more than fit to protect hearth and home.

A troubled start sullied the wide-spread popularity of the 6.8 SPC and the improved SPC II. Unfortunate. The cartridge is perhaps the truest intermediate option for the AR-15 and delivers what it promises. Shooters willing to give the 6.8 another look will likely find their efforts well rewarded.