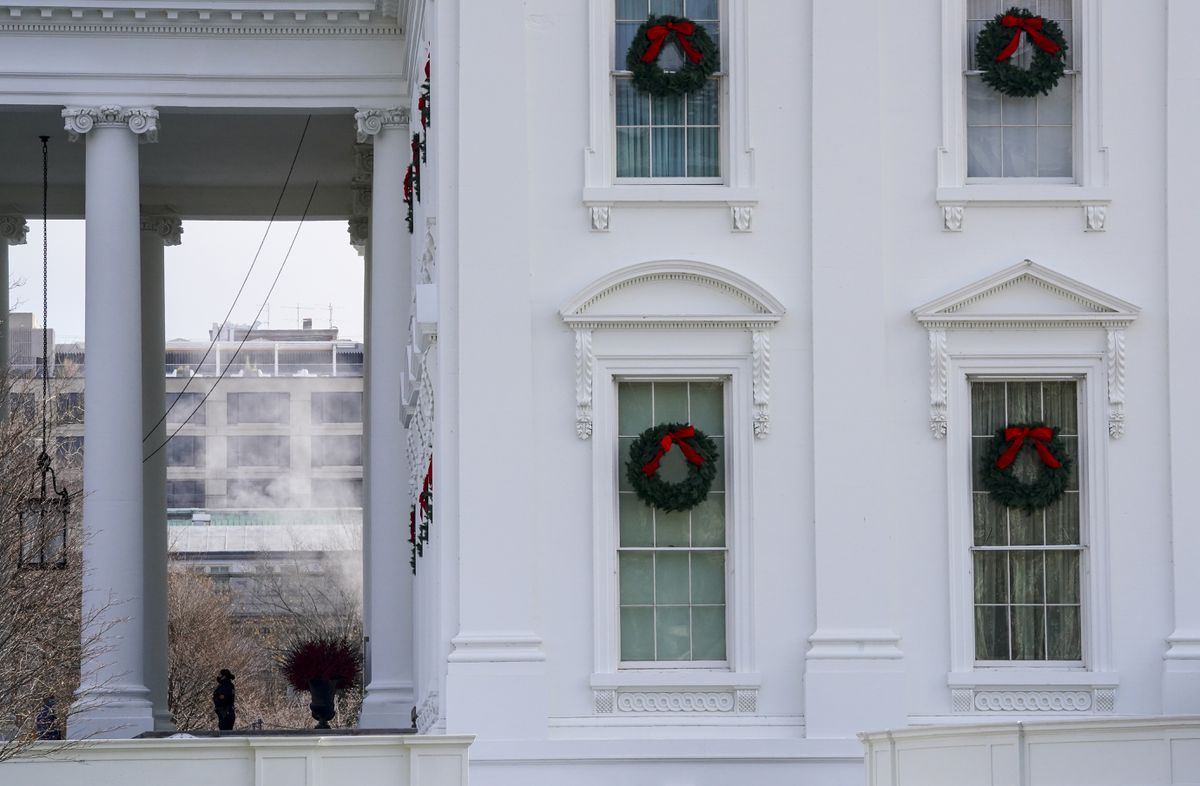 WASHINGTON – With his baseless claims of widespread voter fraud rejected by dozens of judges and GOP leaders, President Donald Trump has turned to a ragtag group of conspiracy theorists, media-hungry lawyers and other political misfits in a desperate attempt to hold on to power after his election loss.

The president’s orbit has grown more extreme as his more mainstream allies, including Attorney General William Barr, have declined to endorse his increasingly radical plans to overturn the will of the voters. Trump’s unofficial election advisory council now includes a felon, adherents of the QAnon conspiracy theory, a White House trade adviser and a Russian agent’s former lover.

Members of the group assembled in the Oval Office on Friday for a marathon meeting that lasted more than four hours and included discussion of tactics ranging from imposing martial law in swing states to seizing voting machines through executive fiat. The meeting exploded into shouting matches as outside advisers and White House aides clashed over the lack of a cohesive strategy and disagreed about the constitutionality of some of the proposed solutions.

Trump’s desire to remain in power was dampened further Monday as Barr said that he saw no basis for the federal government to seize voting machines and that he did not intend to appoint a special counsel to investigate allegations of voter fraud.

“If I thought a special counsel at this stage was the right tool and was appropriate, I would name one, but I haven’t, and I’m not going to,” Barr said during a news conference.

Barr, who is set to leave his post Wednesday amid disagreements with Trump, is the latest administration official to head for the exits or fall out of the president’s favor after not backing his baseless allegations.

In the allies’ place, Trump has welcomed figures from the political fringes who have offered him optimism and ideas for how to stay in power. Their brazen proposals have rankled some of the president’s aides and allies, who have warned that attempting to invoke the military or challenge states’ election processes through executive power would violate the Constitution and backfire politically, according to officials who, like others, spoke on the condition of anonymity to discuss internal strategy.

Trump, however, has been undeterred – despite losing last month’s election to President-elect Joe Biden by more than 7 million votes and a 306-to-232 margin in the electoral college.

After meeting with his personal lawyer Rudy Giuliani on Monday, Trump met in the Oval Office with a group of Republicans from the House Freedom Caucus, including Rep.-elect Marjorie Taylor Greene, R-Ga., a public supporter of the QAnon conspiracy theory whose campaign was marked by racist, anti-Semitic and Islamophobic statements. That was followed by a second meeting in the Cabinet Room among Giuliani, the House lawmakers and Vice President Mike Pence, an administration official said.

Aides said Trump has been searching frantically for pathways to reverse his loss – sidelining officials who try to level with him about it and embracing those claiming to have a solution.

“They dropped hundreds of thousands of ballots in each state. It’s all documented,” the president claimed falsely in a call Monday to a gathering of the pro-Trump youth organization Turning Point USA in West Palm Beach, Fla. “The problem is that we need a party that’s going to fight. And we have some great congressmen and women that are doing it. And we have others, some great fighters. But we won this in a landslide. They know it and we need backing from – like the Justice Department and other people have to finally step up.”

Greene is among House members who have indicated that they would try to challenge congressional certification of the election result on Jan. 6. Trump has been encouraging the move despite its long odds, trying to cajole GOP lawmakers to sign on.

“He is grasping at straws,” one senior administration official said. “If you come in and tell him he lost, and that it’s over, he doesn’t want to hear from you. He is looking for people to tell him what he wants to hear.”

The White House and the Trump campaign did not respond to requests for comment.

Monday’s meeting at the White House followed an Oval Office gathering Friday that was one of the most contentious yet of Trump’s seven-week post-election push to reverse his fate.

Over several hours, the Oval Office erupted into raucous acrimony as the outside advisers proposed a number of extreme measures for reversing the results while the White House officials pointed out that such actions would be unconstitutional or otherwise unworkable.

Powell and others told the president Friday that they had evidence that voting machines had been tampered with, though White House officials said the evidence was nonsense. Powell’s presence in the West Wing – and her returns for additional meetings, including on Monday – are an indication that the outsiders are gaining sway.

Powell had been publicly dismissed from Trump’s legal team last month, with several Trump advisers saying the president thought a conspiracy-filled news conference she held Nov. 19 had been too outlandish. Trump has since gravitated back to her because other advisers are not giving him any paths to victory – and she claims to have paths, aides said. During the meeting Friday, Trump considered naming Powell as a special counsel to investigate voter fraud, officials said.

Giuliani proposed that the federal government seize and inspect voting machines from states where the president is challenging his loss.

Flynn, who had said on Newsmax the previous day that Trump could order the military to rerun the election in key swing states, was on hand to discuss his idea.

White House aides pushed back strongly on the idea of invoking martial law, officials said, but the raw feelings from the meeting have since spilled into public view.

Powell, who has repeatedly told the president that his aides are too timorous and should be taking stronger steps, has taken some of her criticism public since the meeting.

While Powell, Flynn and Giuliani were well-known advisers to Trump even before the election, Byrne has emerged as a relatively new character in the president’s orbit. He has filled a void left after longtime aides including Kellyanne Conway, Jared Kushner, campaign manager Bill Stepien and his deputy, Justin Clark, have largely disappeared from the scene.

He has taken to social media to taunt the other officials present for Friday’s meeting, accusing Cipollone of being a “leaker” and saying the president is surrounded by “mendacious mediocrities” who want him to lose – including his chief lawyer and his chief of staff.

As the founder and chief executive of Overstock, Byrne was known as an eccentric but often prophetic financial forecaster. For years, he maintained a blog called Deep Capture, in which he spun wild conspiracy tales, claiming that he was a target of Russian mobsters because of his exposure of short-selling stock schemes on Wall Street.

He resigned from the retailer in August 2019, after revealing that he had engaged in a multiyear romantic relationship with Maria Butina, the Russian graduate student who pleaded guilty in April 2019 to conspiring to act as a Russian agent and trying to build inroads on behalf of the Kremlin with prominent Republican politicians and conservative organizations, including the National Rifle Association.

Butina served five months in federal prison and was deported to Russia in October 2019.

Byrne has said he came to believe Butina was merely an inquisitive student and has alleged that the charges against her were part of a “deep state” plot to hurt Trump. The allegations, which he initially put forward on Overstock letterhead, led the company’s stock to plummet last year and, ultimately, to his ouster as CEO.

In interviews with conservative media personalities in recent weeks, Byrne has promoted the same conspiracy theories about the 2020 election that have been backed by Powell. He has claimed that he is working with hackers who have shown that enormous security lapses allowed votes to be manipulated in key counties, stealing the presidency from Trump.

“This is a soft coup, make no mistake,” he told conservative radio personality Glenn Beck this month.

Byrne, who did not respond to interview requests, says he has spent millions of dollars on probing the election out of concern for the nation. He describes himself as a libertarian who did not vote for Trump.

But speaking at a pro-Trump rally in Washington this month, he called the election an operation by hostile foreign states, including China and Iran.

On Sunday, Byrne turned his ire toward Trump’s aides. The president, he wrote on Twitter, was being “terribly served” by officials in the White House – a comment endorsed Monday by former Trump campaign manager Brad Parscale.

Byrne said that Trump “is standing up to his waist in snakes,” and that he should trust only Giuliani and Powell.

Trump also has complained that he is not receiving enough loyalty from his allies, a coping mechanism when he finds himself losing, said Nancy Rosenblum, a professor of ethics in politics and government at Harvard University.

“When he finds himself humiliated, he charges, of course, that his allies are weak, that there is no one with any courage,” said Rosenblum, co-author of “A Lot of People Are Saying: The New Conspiracism and the Assault on Democracy.” “So it’s not surprising that he’s had to move to more extreme measures.”

On Monday, Trump criticized a conservative judge in Wisconsin who sided against him in a fraud case. Although Biden’s win has been certified in Wisconsin and upheld by state and federal courts, Trump called the state’s Republican-led legislature to step in and overturn the results.

“Great Republicans in Wisconsin should take these 3 strong decisions to their State Legislators and overturn this ridiculous State Election,” Trump wrote on Twitter, referring to the dissenting opinions in the 4-to-3 case against him.

He ended the tweet with a false claim he has made repeatedly: “We won in a LANDSLIDE!”

The Washington Post’s Matt Zapotosky contributed to this report.