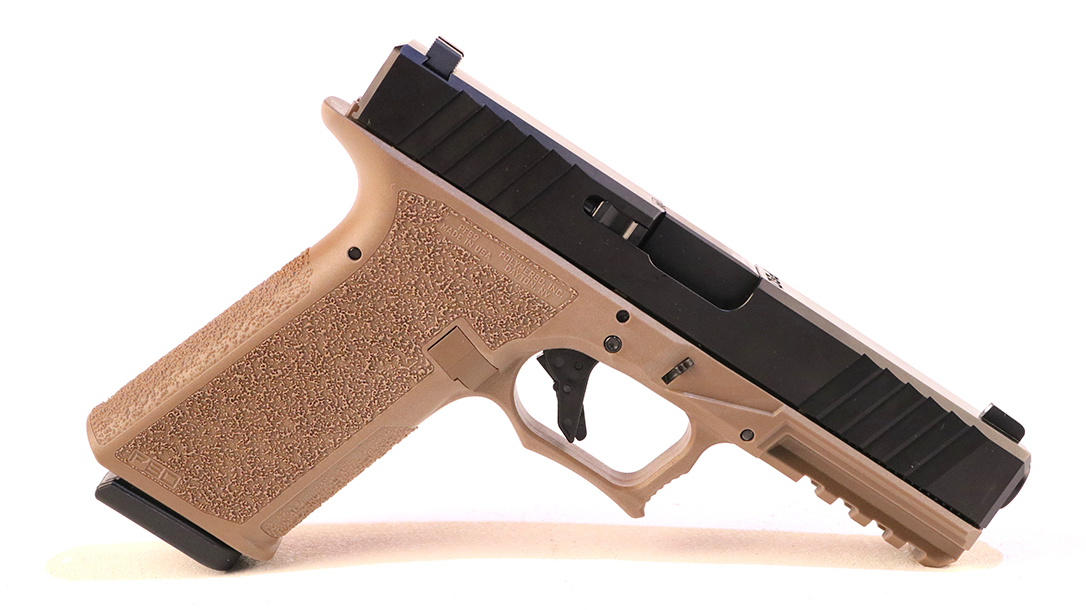 In 1891, Georg Johann Luger took a job as an accountant with Ludwig Loewe & Company of Berlin, Germany. Over the next three years, Georg gradually earned a role as consultant designer. Three years after that, Luger traveled to America to demonstrate the radical new Borchardt C-93 pistol to the U.S. Army. By then, Ludwig Loewe had morphed into the Deutsche Waffen und Munitionsfabriken (DWM, or German Weapons and Munitions Works). Despite Luger’s efforts, the U.S. Army rejected Borchardt’s creation as being too cumbersome and complicated to make an effective combat pistol.

With the creative seed now planted and fertilized, Luger returned home, dissected Borchardt’s innovative toggle-lock design and made it better. The result became the iconic Luger P08 Parabellum, one of the most effective and recognizable handguns ever made.

In an odd way, the trajectory of this tale parallels that of the new Polymer80 PFS9 pistol. Sometimes imitation really is the sincerest form of flattery.

It all started with the Gun Control Act (GCA) of 1968. From the BATFE website, “Firearms may be lawfully made by persons who do not hold a manufacturer’s license under the GCA provided they are not for sale or distribution and the maker is not prohibited from receiving or possessing firearms.”

With this ruling as an impetus, about five years ago a company called Polymer80 began marketing 80-percent polymer receiver blanks for AR-15 and AR-10 rifles as well as Glock-style handguns. The handgun offerings are available in standard, compact and subcompact sizes and are fully compatible with appropriate Glock parts, including slides, magazines and barrels.

It was a relatively straightforward chore to finish one of these frames out at home using hand tools. A cottage industry arose orbiting around parts and parts kits for these 80-percent polymer-framed handguns. The indomitable engine that is capitalism drove innovation, and this innovation steadily made things better. Then one day the good folks at Polymer80 woke up and realized that they had indeed created a better mousetrap. As a result, Polymer80 is now offering complete serialized handguns based upon factory-finished versions of its frames. The resulting PFS9 pistol starts where Glock left off.

The Glock parentage is patently obvious, but there are some neat new twists with the PFS9. Glocks sport a 22-degree grip angle. By contrast, John Moses Browning’s 1911 has an 18-degree grip angle. The new PFS9 frame is closer to the 1911 than the Glock and subsequently feels more natural to corn-fed Americans like me.

Polymer80 offers its new turnkey guns in both full-sized and compact configurations roughly corresponding to the Glock 17 and 19 chassis. The trigger is the same preloaded striker-fired design as might be found on a Glock. However, the PFS9 version is smoother and consequently more comfortable. The controls and general architecture are otherwise similar.

The PFS9’s frame differs from a Glock’s in a couple important ways. There are no interchangeable backstraps, and the rear aspect of the frame is nice and straight like that of the original 1911 pistol. This arrangement fits my modestly large hands perfectly. My petite bride has comparably petite mitts, and she said it suited her as well.

The stippling is both attractive and functional on the front- and backstraps as well as the sides. You might have to submit your Glock frame to some sort of expensive laser treatment to obtain a comparable grippiness. The triggerguard is undercut to promote a high hold, and it’s more angular with a finger groove up front if you’re into such details. The dust cover is railed for accessories. Unlike that of the Glock, this rail treatment runs the full length of the dust cover to accommodate anything you might put there. The magazine release also protrudes a bit farther than a Glock’s, while the slide stop is about the same. The overall effect is just a bit more angular and utilitarian.

The PFS9’s slide has somewhat sharper edges than a Glock’s, and you’ll find deep cocking grooves at the front and rear. The PFS9 also comes standard with an indestructible set of snag-free steel sights. The front sight features a big white dot while the rear is serrated to cut down on glare. Glock’s polymer sights have long been a sore spot for Glock geeks. The PFS9’s slide and barrel also feature a high-tech surface treatment that makes the gun environmentally rugged.

The beefy claw extractor is unstoppable, and the extractor serves double duty as a loaded-chamber indicator. Where allowed, the PFS9 pistol comes with a pair of 17-round premium magazines from SGM Tactical. Finally, the disassembly and maintenance processes are identical to any of the several zillion Glock pistols already in service around the globe.

Overall, the PFS9 seems like a standard Glock pistol that has been nicely customized. A lot of the cool-guy stuff you might have to retrofit to your Glock comes standard on the new PFS9. Both pistols seemed comparably rugged.

We grizzled gun nerds do so like to color-coordinate our toys with our wardrobes these days. Polymer80 offers its PFS9 frames in black and Flat Dark Earth (FDE). While it may seem that I’m peering disdainfully down my long Roman nose at this fresh new practice, I do freely admit to clamoring for an FDE frame for this project. Don’t hate. It does look undeniably cool.

The result is a gun that really will do everything your corresponding Glock will do—only better and all at a sweeter price. It’s nice to have upgrades come standard out of the box with the PFS9. The gun looks extremely sleek. However, the real test comes when we turn a little ammo into noise.

I ran the full-sized PFS9 alongside a tricked-out Vickers Glock 17 Gen3 as well as an otherwise stock G17 Gen4. The trigger on the PFS9 is the nicest of the three. Triggers have personalities, and these personalities define the overall system. The PFS9 trigger is utilitarian yet refined.

All striker-fired triggers will exhibit some predictable take-up as the striker spring is fully compressed, followed by a discrete break as the gun fires. Standard Glock triggers are honestly pretty mushy. The Glock trigger is obviously entirely serviceable, but the gun nerd truly committed to his craft can just barely discern inconsistencies in the pull as the trigger does its thing from start to finish. By contrast, the trigger of the PFS9 is just glassy smooth throughout the take-up. It really is the nicer design.

The slide locked back every time I emptied a magazine, and magazines veritably fled from the gun when the mag release was activated. There’s the standard void at the back of the magazine well that allows you to grab the magazine in the profoundly unlikely event that it might ever hang up. The beavertail on the PFS9 is also just a tiny bit more generous than a Glock’s; you couldn’t catch your hand on this slide if you set your mind to it.

The manual of arms is foundational dogma for anybody who’s run a striker-fired pistol before. The PFS9 shot to the point of aim at 15 yards right out of the box. On the topic of boxes, the lockable case the PFS9 pistol arrives in is topflight.

Sixty-five percent of the cops in America carry Glock handguns. So do many of America’s most elite special operators. Since its introduction in 1982, Gaston Glock’s eponymous platform has taken the world by storm. Nowadays, Glock offers variations of its basic gun in single-stack, double-stack, subcompact, compact, long-slide and target versions in scads of different calibers. The standard Glock pistol has only 34 parts and will keep shooting even if you store it in the center of the sun. Such rarefied performance was destined to spawn some serious competition.

In the Polymer80 PFS9, we see the Glock action now further refined. Some of the edges are sharper and the grip angle is different, but the basic Glock ambience is definitely there. However, the gun has its own comportment. Like cousins, these two pistols are fundamentally similar yet different. The PFS9 just seems to hail from a slightly nicer neighborhood.

Every single component of the PFS9 is user-serviceable. Like an airplane or a tank, if your life depends upon a tool, it behooves you to know it well. With the Polymer80 PFS9, it is a straightforward chore to become thoroughly intimate with the gun’s entrails. The PFS9 starts with one of the world’s most reliable handgun designs and then makes it just a little bit better. Slick, reliable, well-reasoned and cool, the PFS9 is indeed an improvement on the original. For more information, visit polymer80.com.

Bond Arms PT2A: Pistol Doubles Down on Protecting 2nd Amendment
US judge tosses NRA bankruptcy bid
Abbreviated Pundit Roundup: Reaching a pandemic milestone
In These 11 Cases, a Firearm Saved the Owner or Others
Texas judge dismisses NRA’s bankruptcy case — is this the beginning of the end?