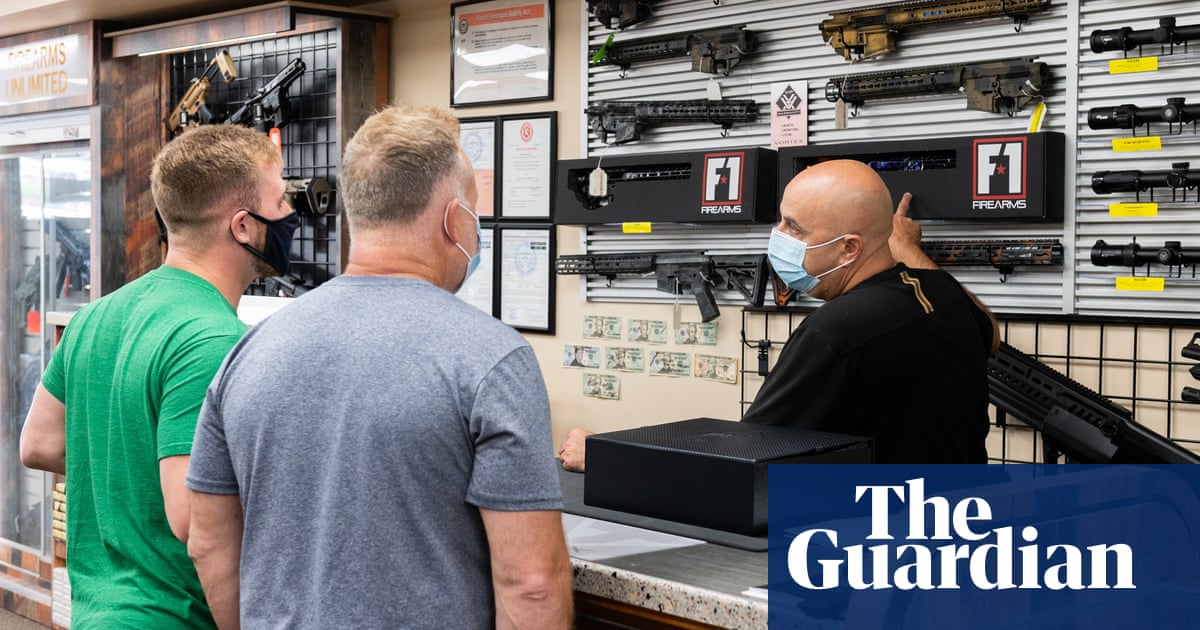 Americans have bought nearly 17m guns so far in 2020, more than in any other single year, according to estimates from a firearms analytics company.

Gun sales across the United States first jumped in the spring, driven by fears about the coronavirus pandemic, and spiked even higher in the summer, during massive racial justice protests across the country, prompted by police killings of black Americans.

“By August, we had exceeded last year’s total. By September, we exceeded the highest total ever,” said Jurgen Brauer, the chief economist of Small Arms Analytics, which produces widely-cited estimates of US gun sales.

The estimated number of guns sold in the US through the end of September 2020 is “not only more than last year, it’s more than any full year in the last 20 years we have records for”, Brauer said.

The previous record for estimated firearms sold in a single year was 16.6m in 2016, when Hillary Clinton ran for president against Donald Trump and endorsed a strong gun-control platform, he said.

The spike in gun sales comes amid rising tensions and intense political polarization. Citing “the current unrest”, Walmart removed guns and ammunition from display in stores this week, as a “precaution” against theft if stores are robbed, the Wall Street Journal reported. The retailer did not confirm when firearms and ammunition would be put back on display but said that customers could continue to buy guns and ammunition by request.

Walmart has already restricted the types of guns and ammunition it sells in the wake of mass shootings and other instances of gun violence. Last year the company announced it would no longer sell ammunition for military-style rifles after a white nationalist terror attack targeting Latino families at a Walmart in El Paso, Texas.

The increase in gun sales appeared to be primarily driven by more purchases of handguns, though Americans were also buying more rifles and other long guns, Brauer, the firearms analyst, said.

While there is no hard data on how many Americans bought a gun for the first time this year, advocates across the political spectrum say they believe that many of the guns sold in 2020 went to new gun owners.

Fears about lawlessness and government instability drove many people to purchase firearms, according to a recent survey of California residents conducted by researchers at the University of California, Davis.

Of the people who said they had bought guns this year, “Two-thirds expressed worry about lawlessnes, and close to half worried about prisoners being released. Half also cited worry about the ‘government going too far’,” said Nicole Kravitz-Wirtz, the lead author of the study.

In the past, demand for guns in the US has typically spiked in reaction to events that are seen as increasing the risk of new gun control laws, including major mass shootings and the chance that a Democrat might win the White House. Barack Obama was known as America’s greatest gun salesman, while firearm sales initially slumped under Trump, whose election victory was backed by more than $30m from the National Rifle Association.

This year, months of sustained demand for firearms has resulted in continuing shortages, as well as rising prices, gun owners say.

“I don’t think there’s been anything like it in my 30 years of being involved in firearms,” said Chuck Rossi, one of the founders of Open Source Defense, a gun-rights group created by current and former tech workers.

“There’s no inventory. There are no guns to buy. There is no ammunition to buy. There continue, to this day, to be lines at the gun counters, with empty shelves.”

Gun violence prevention advocates said the sustained surge in gun sales was deeply troubling and could contribute to an increase in domestic violence, suicide, and children accidentally shooting themselves or other people with adults’ guns.

An increase in gun purchases in just the first three months of the coronavirus pandemic was associated with a nearly 8% increase in firearm violence in the US, according to an estimate from researchers at the University of California, Davis.

That increase translated into an estimated 776 additional shooting injuries in the US from March through May, the researchers found. States that had lower levels of violent crime pre-Covid saw a stronger connection between additional gun purchases and more gun violence.

“The gun industry thrives in a culture of fear. Their business model is based on a model of leveraging people’s fear in order to buy these products, and they never talk about the risk,” said Robyn Thomas, the executive director of the Giffords Law Center to Prevent Gun Violence.