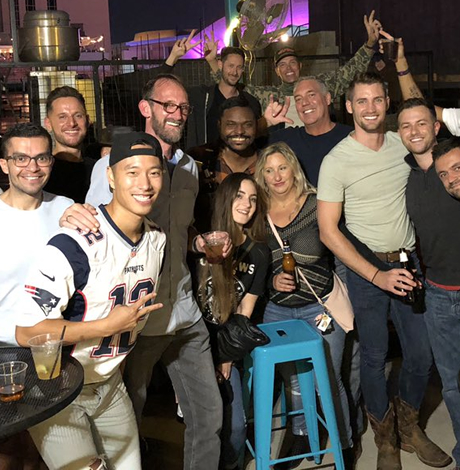 Coming off the heels of a confab in Nashville, gay conservatives are spurning criticism of President Trump’s anti-LGBTQ record and marshaling support for his re-election with Pride-themed events in states seen as competitive in the upcoming election.

With one “Trump Pride” event Tuesday evening in the Philadelphia suburbs now concluded, another was set to take place Wednesday in Phoenix — but they’re just the first two, Charles Moran, co-chair of the Trump Pride coalition, said Wednesday to the Washington Blade.

A subsequent event not yet officially announced is set to take place Saturday in Tampa and another event is to be determined, Moran said.

The locations for each of the “Trump Pride” events appears strategically placed in swing states in the 2020 presidential election. The Trump campaign didn’t respond to the Blade’s request to comment on any strategy behind the events.

The event near Philadelphia on Tuesday featured Richard Grenell, the former acting director of national intelligence and the face of LGBTQ outreach for Trump’s re-election, and Lara Trump, the wife of Eric Trump who has been a surrogate for her father-in-law’s campaign. The Trump campaign’s announcement of the event was panned for not mentioning the terms “gay” or “LGBTQ.”

Bridget Sharpe, Arizona state director for the Human Rights Campaign, slammed Moore and Ward in a statement as “anti-equality extremists,” saying their involvement “is proof that his campaign’s LGBTQ outreach is a sham.”

“Their extremism and anti-equality actions are rivaled only by the dangerous and destructive policies the Trump-Pence administration has perpetrated against LGBTQ people over the last four years,” Sharpe said. “Nobody who knows the history of these extremists can listen to a word they say and believe they are allies in our fight for equality.”

Making a play on words, Sharpe went on to say the Trump administration’s record “is nothing to be proud of — it has actively endangered LGBTQ lives while we still have so much to accomplish.”

“Starting outreach in mid-October will not cut it, and LGBTQ and pro-equality voters will send Trump and Pence packing in November in favor of true allies and champions of equality in Joe Biden and Kamala Harris,” Sharpe said.

As evidence Moore, who’s gay, is an anti-equality extremist, the Human Rights Campaign cites him denying Trump’s policy against transgender people in the military is ban, an article he wrote refuting the narrative transgender pioneers Marsha P. Johnson and Sylvia Rivera were leaders in the Stonewall riots and a shared photo of transgender gubernatorial candidate Christine Hallquist on Instagram with the caption of “no comment” denounced as an attack on transgender people for their looks.

For Ward, her votes as an Arizona state legislator for a bill enabling religious freedom in the name of anti-LGBTQ discrimination are cited, as well as criticism of former U.S. Attorney General Loretta Lynch for filing a lawsuit during the Obama administration against North Carolina’s anti-transgender bathroom law, House Bill 2.

Neither Moore nor Ward responded Wednesday to the Blade’s request to comment on criticism from the Human Rights Campaign.

Preceding the Trump Pride events was an event last week in Nashville, where an estimated 75 gay conservatives gathered at the first Outspoken Pride event, which is a project of National Log Cabin Republicans.

Charles Moran, wearing his separate hat as managing director of Log Cabin Republicans, said it was intended “to create a space to convene some of our major influencers and movement leaders in the center-right LGBTQ community.”

“While Log Cabin Republicans is generally well-known in the establishment GOP/traditional campaign circles, our GetOutspoken campaign, as well as the broader Trump movement, has activated countless supporters well outside of the normal political channels, so we wanted to create an event that would help bring these new influencers into the fold, since they connect with so many supporters and voters,” Moran said. “I think our weekend was a success in that respect.”

Among the attendees, Moran said, are gay conservatives notable on social media, including Grenell, “Walk Away” movement founder Brandon Straka, Rob Smith, and anti-Antifa journalist Andy Ngo, as well as voices highlighted in the Outspoken project, such as Hazem Farraj, Christian Walker and David Leatherwood.

President Trump addressed the Nashville crowd by phone, as did the Vice President Mike Pence, who’s notorious for his anti-LGBTQ record, and second lady Karen Pence, according to Grenell.

Moran affirmed Trump and the Pence family addressed Outspoken and gave a limited readout of those calls.

“We did speak to the President, the Vice-President/Mrs. Pence,” Moran said. “They acknowledged our support, expressed their appreciation for what we’re doing to engage the broader LGBTQ community, and highlighted and recommitted to the administration’s HIV/AIDS and [decriminalization] initiatives.”

To be sure, Trump has built an anti-LGBTQ record during his administration that includes barring individuals with gender dysphoria from serving in the military widely considered a transgender ban, administrative actions allowing anti-LGBTQ discrimination in the name of religious freedom and arguing before the U.S. Supreme Court federal civil rights law doesn’t cover LGBTQ people.

The event was timed to co-coincide with a Nashville rally hosted by Brandon Straka, who through his “Walk Away” movement has sought to convince demographics commonly associated with the Democratic Party to leave, including LGBTQ people.

Straka said the Nashville event was the start of a trend of “freeing LGBT people from the clutches of the destructive Democrat (sic) party,” which he said will lead to LGBTQ people thinking for themselves, renouncing victim mentality, and embracing the concept of more opportunity and choice in politics and culture.

“As attitudes have shifted dramatically in the past few years within the Republican Party, LGBT people are increasingly finding that making the choice to #WalkAway from Democrats and embrace the patriotism and American optimism of the right is a better fit for them than continuing down the empty and gainless path of illogical leftist anger, rage, destruction, chronic discontent, anti-Americanism and bottomless misinformation,” Straka added.

A Call For Gun Control At The Tree Of Life Mass Murder Remembrance
Was Bloomberg Group Shamed Into Being (Sort of) Honest?
First Look: Apex Tactical Specialist 509 LongSlide
Media: “With NRA Under Fire, Gun Banners Flexing Their Muscle”
Adventure Fishing and Cooking Fish Eating for Lunch in Wild