While gun stores aren’t bristling with .30-06 rifles of the semi-auto variety, they can be found and are spectacular.

Walk into a gun store, you can’t help but trip over a .30-06 Springfield rifle. More than a century old, the .30-caliber remains one of the most prolific chamberings with nearly every rifle maker having at least one option in the old warhorse.And that option, by and large, is a bolt-action.

Nothing wrong with that. Turn-bolts remain among the most trusted rifles available—the perfect blend of hair-splitting accuracy and speed. Well … enough speed for a follow-up shot on a deer or elk. But if you want to pick up the pace, you’re plum out of luck with .30-06 rifles. Or are you?

Yes, Virginia, there are .30-06 semi-automatic rifles. Not many, mind you, but they exist and in most forms are pretty dang spectacular. So from old military surplus to new high-tech hunters, we’ve gathered up six .30-06 rifles that scratch your semi-automatic itch. 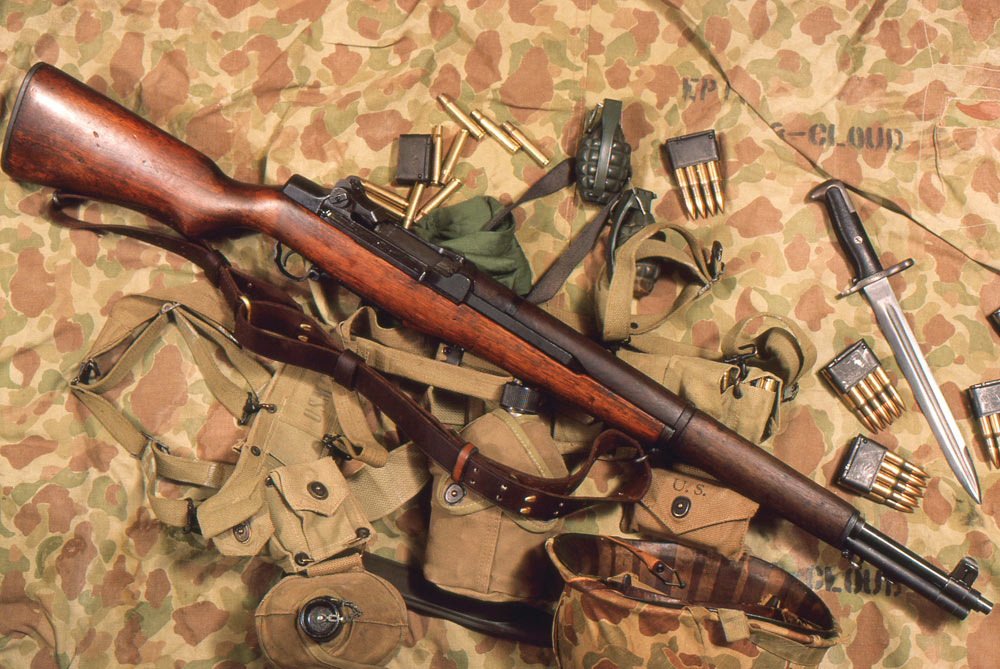 You knew this glorious example of gun genius would top the list. How couldn’t it? From the black sands of Iwo Jima to the snow addled forests of Bastogne, the Garand more than earned its reputation as the “Greatest battle implement ever devised.”

Next to being a .30-06 rifle, the semi-auto’s greatest draw is its dependability. Battle-tested, the rotating bolt, long-stroke piston design has built a reputation for reliability in nearly any conditions. Additionally, the Garand is pretty dang accurate to boot. Some of this is thanks to the 24-inch barreled service rifle’s heft, a whopping 9.5 to 11.6 pounds. Loaded via 8-round en block clips (watch out for the M1 thumb) there’s a tantalizing throwback quality to operating the Garand, even if it’s a bit archaic in today’s detachable-box-magazine world. A side note, get one in your possession, make sure you choose your ammo carefully—the M1 isn’t made for today’s hot-rod .30-06 loads.

Still plentiful, the M1 is easily had despite the last official Garand rolling off the assembly line in 1957. Most on the market don’t have any war patina to them. Instead, they are surplus rifles re-imported from Cold War allies, many (few now) un-shot. The Civilian Marksmanship Program is still a steady source as are numerous gun auction sites. Unfortunately, there’s a lot of “Why didn’t I buy one 25-years ago…” in the guns, as their prices have substantially increased over the year.

MSRP: Count yourself lucky if you find an operational one in fair condition at $650 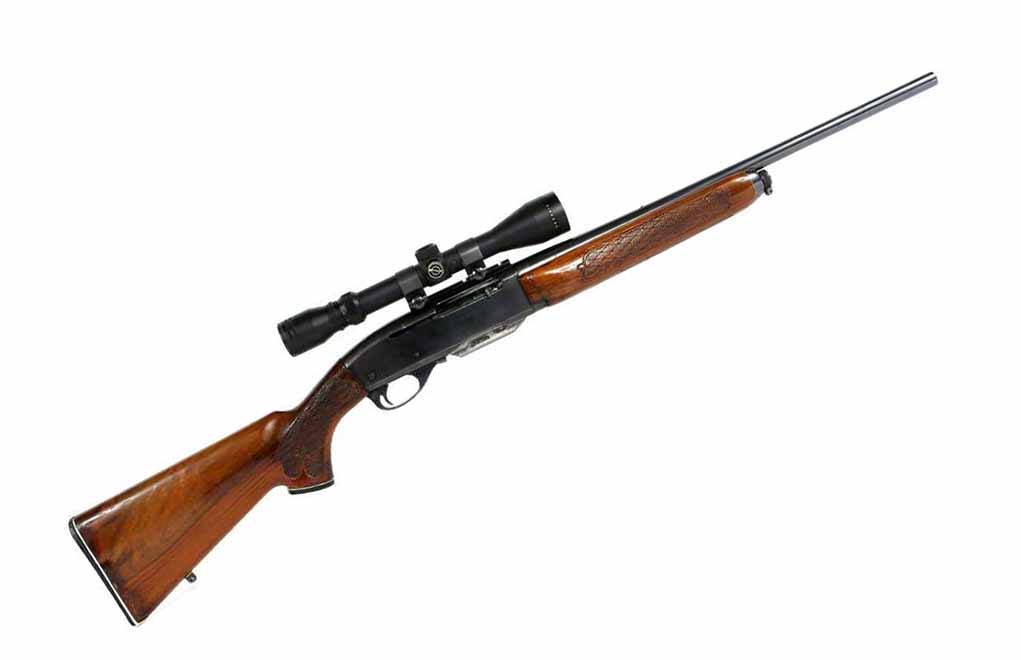 Another out-of-production gem is up next in our stroll through .30-06 rifles of the semi-auto variety. Wait! The Woodsmaster a gem? Why yes, if you use it for its designed purpose—hunting. Plenty accurate and quick shot to shot, the 742 is an excellent option for nearly all of North America’s large game. Used that way, the gas-operated semi-auto it tends to run like a top.

Where shooters seem to run into issues is pushing the .30-06 rifle (it comes in other popular hunting calibers) past its limits. A range toy it is not. Run more than a couple of boxes of ammo through the gun playing around and likely you’ll run into the main complaint about the 742—jams. A very good cleaning usually rectifies the issue.

Oddly, the rifle is a derivative of perhaps Remington’s most famous semi-auto shotgun—the 1100. In fact, it uses the same action. Overall, the gun is fairly short—nearly carbine length—making it an ideal option in brush and as hog medicine. Furthermore, the 742 feeds off a detachable box magazine, making reloads quick. The rifle came with a stock 4-round, flush-fit mag, but 10- and 20-round options were available—the latter a bit rarer.

Do some hunting, it’s possible to nail a Woodsmaster down for a good price. But doublecheck the receiver rails—where the bolt travels. Integral with the action, once these wear out the gun is pretty much done.

MSRP: $400 and up in good and very good condition.

Learn More About The .30-Caliber: 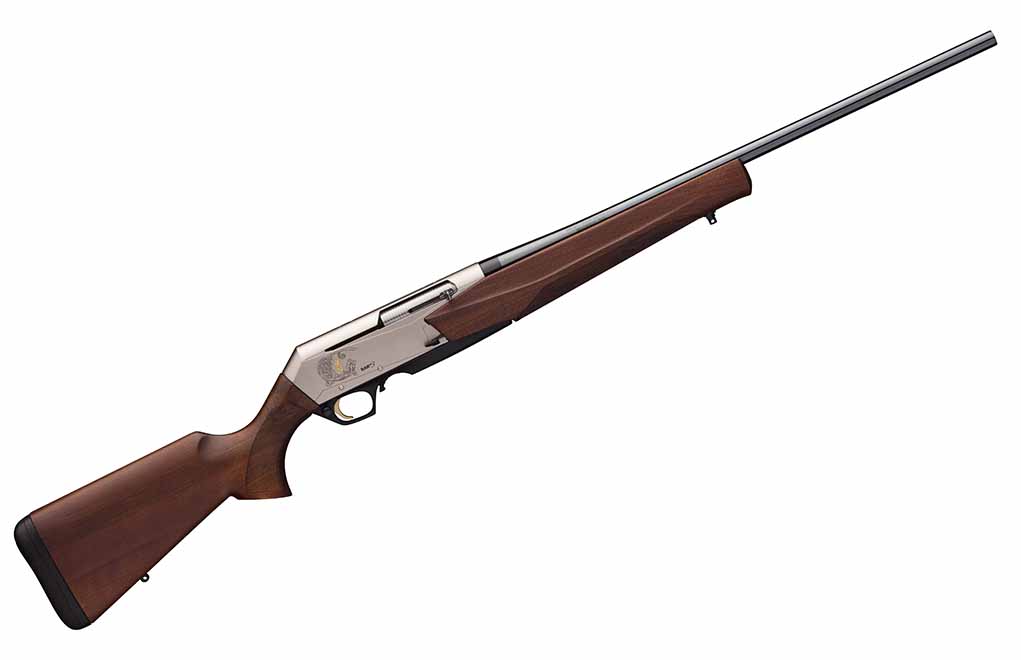 Sorry, we’re not talking about the M1918.
Though, the hunting-focused variety of the Browning Automatic Rifle (BAR) is no less storied in its own realm. Arguably, it’s rifle which all other semi-automatic hunters are measured.

As far as commercially available autoloading .30-06 rifles go, the BAR has been one of the longest-running coming on to the market in 1966. And the design is genuinely Browning. Sorry again, we’re not talking John M. Browning, but his talented grandson Bruce Browning. The younger Browning and Maurice Olinger set out to advance the M1918 design and commercialize the select-fire weapon, ending up with a unique design that’s weathered the test of time.
Now in its third generation, the Mark III, the BAR has more than proven its staying power.

Gas-operated, via a long-stroke piston, the rifle is surprisingly mild shooting for what can prove a stout cartridge. This makes the gun very fast and accurate on follow-up shots, a quality that has endeared it to more than one hunter. Additionally, the Mark III’s seven lugs rotating bolt head makes for an extremely strong lock-up, so strong the rifle was among the first semi-autos capable of handling magnum cartridges. Despite Browning introducing a detachable box magazine model in the latest generation, the .30-06 variations still all feed off a hinged floor-plate box magazine.

Perhaps the BAR’s biggest draw, aside from solid performance, is its looks. Long on walnut and blued steel, the rifle looks and feels like a traditional hunter. 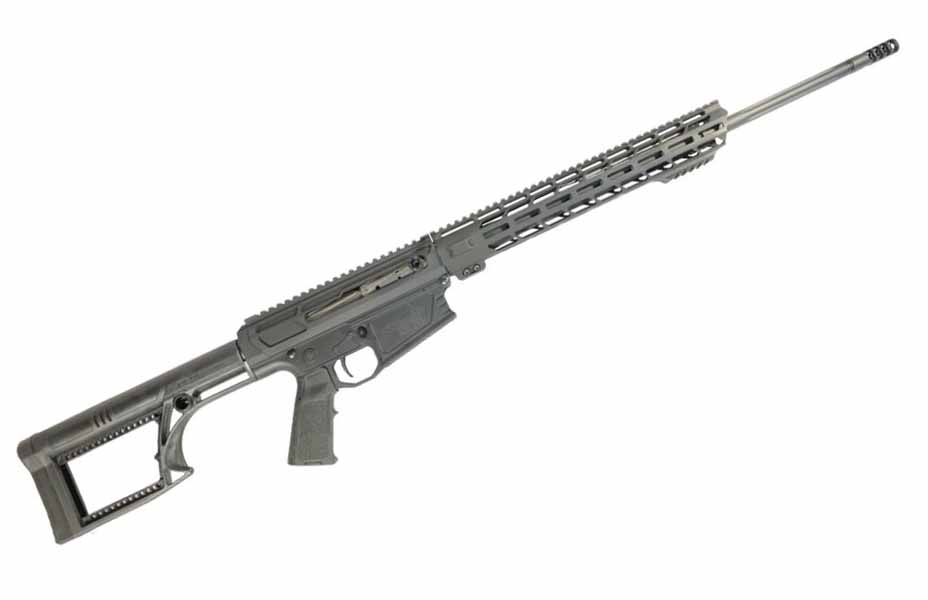 Despite running a longer cartridge, thus boasting a slightly larger receiver, the rifle is as familiar as any other derivative of Eugene Stoner’s original. Especially nice, the controls—mag release, safety, bolt catch—all where you expect them, thus intuitive to operate. The one difference is the side charging handle, which while a beat off normal, isn’t anything that glues up the works. Best of all, the BN36X3 boasts AR-level magazine capacity. Though, the 20-round mag is proprietary—nothing too unusual in the world of AR-10s—so ends up running a pretty penny.

The Noreens—father-son team Peter and Paul—built their reputation in custom-made, precision rifles and bring plenty of that knowhow to the BN36X3. In addition to top-quality parts, it’s also reflected in the accuracy of the rifle—fully capable of 1 MOA precision on the regular. Aiding in some of this, and making the rifle’s recoil more manageable, is its heft—a full 9 pounds. However, this tends to make it a bit cumbersome on long treks into the backcountry, if you’ve happened to pick one up for hunting.

In .30-06, the BN36X3 is also available in two 16-inch barreled carbine configuration, if you’re in the market for a slightly more wieldy option. In any case, given the guns are made to order, expect to open up your pocketbook. 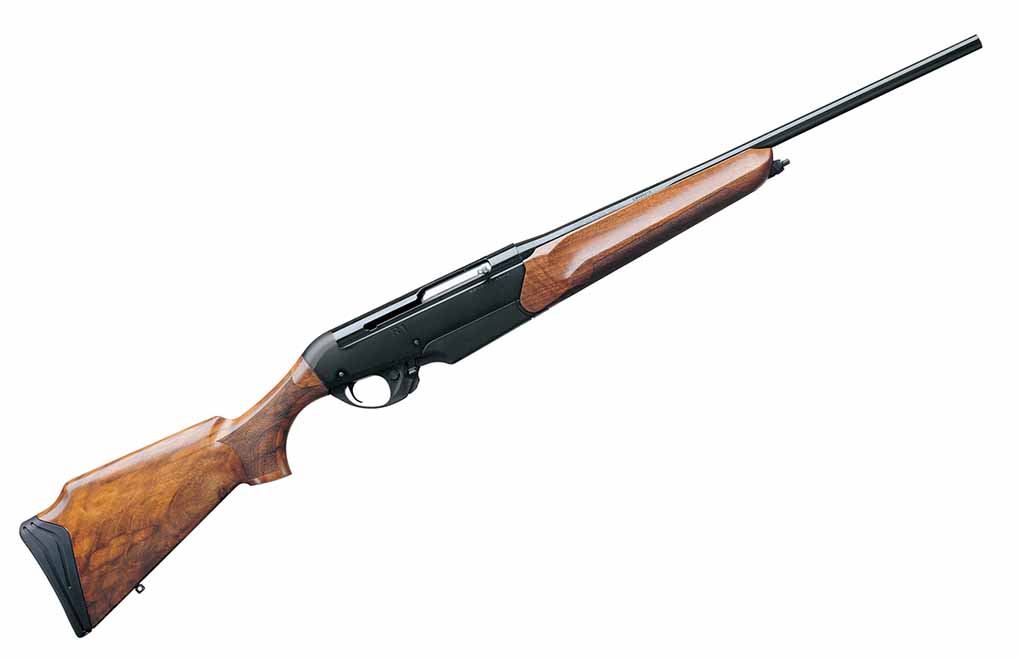 Generally, Benelli conjures up downing ducks on the wing or smashing clays as quickly as their thrown. That is, the Italian company is known for their shotguns—particularly the inertia-driven variety. But the top-notch gunmaker also turns out a class rifle and has for some time. In the case of autoloading .30-06 rifles, it’s a tradition that has been going on for nearly 30 years now.

While it doesn’t quite garner the attention of the Browning BAR, the R1 is an excellent and well-made semi-automatic hunting option. With the classy lines of a standard field rifle, the gas-operated gem appeals to those who look for a traditional take on their hunting iron. But the gun has a tactical heart. In particular, it boasts Benelli’s Auto-Regulating Gas Operated (ARGO) system found in the popular M4 tactical shotgun—adopted by U.S. Joint Services. Reliable as the day is long and capable of cycling no matter the ammo, the system gives the rifle a level of dependability arguably heads and shoulders above the rest.

Being gas operated, the R1 is also a kitten in .30-06, considerably knocking down the cartridge’s stiff recoil. This adds up to a much more pleasant and shootable rifle that realistically can place accurate follow-up shots quickly. Why else have a semi-auto hunter? Another nice touch, Benelli opted for a detachable box magazine on the R1. But don’t expect extended capacity options—4-round is pretty much the limit, though convenient. 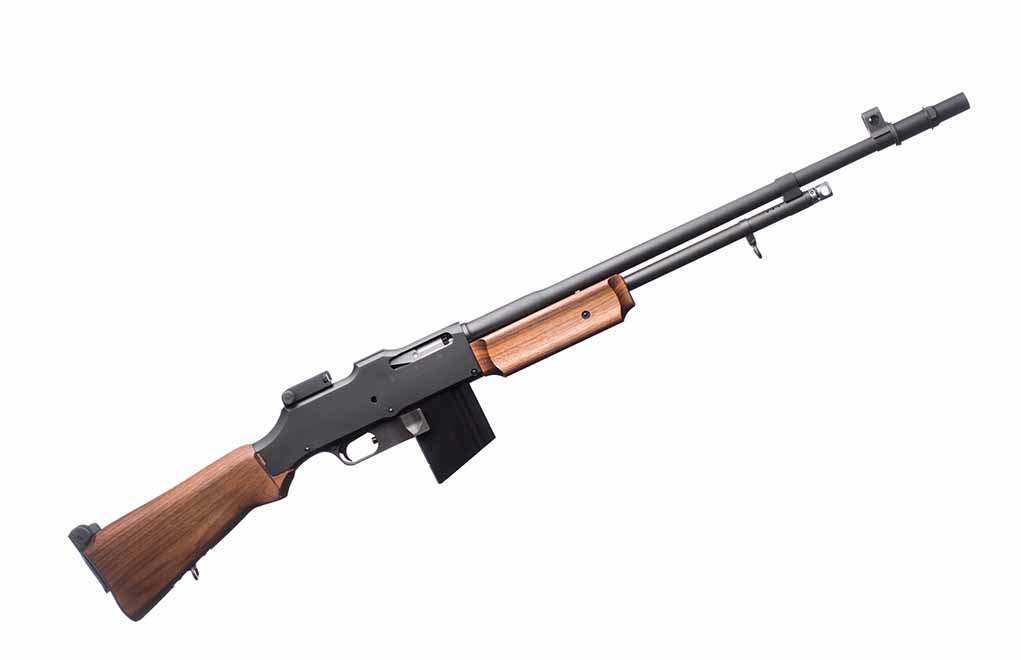 Perhaps not as storied as the M1 Garand, the John M. Browning M1918—or Browning Automatic Rifle (BAR)—stirs the imagination. Unparalleled service, particularly in World War II, the rifle is the stuff of legends. While you don’t get select-fire in Ohio Ordnance Works’ (OOW) rendition of the classic warhorse, it’s far from a deal-breaker for those with a yen for classic military arms.

Truly, the 1918A3-SLR is a beauty, though it’s not a spitting image of the original. Dissuading those who might attempt to put original BAR parts into the new rifle—thus achieve a fully-automatic firearm—OOW slimed down the receiver. This and two takedown pins, instead of one, are about the only ways the gun veers from the original design. There’s a good reason for this—many of the gun’s main parts are from original World War I gun—that and Swedish surplus. This includes original barrels in many cases and 20-round magazines, which are stout as oaks.

Now, if you’re up on your war movies, you’ll understand you aren’t signing up for a lightweight in the BAR. Everything about the rifle is super-sized from barely grippable grip to 20-pound heft. That said, it proves a very shootable rifle, easily kept in the MOA neighborhood at 100 yards with iron sights. The other issue, the 1918A3-SLR is the most expensive .30-06 rifle on this list and perhaps anywhere in the market. Given the alternative—an actual BAR—runs the same as a new half-ton pick-up truck, the rifle still no bad old deal.