How the 2020 presidential election may be won or lost in the suburbsLouisiana considering law changes after BB gun suspensionFirst Look: The Competition-Angled Krieghoff K-80 Parcours-XAdventure Cooking and Wild Pick Up Some Wild Fruit for Yummy EatingHow To Find Water Well Underground – Find Ground WaterRalph Z. Hallow, Washington Times editor, reporter, remembered for insight into GOP political scene‘Guns are a way to exercise power’: how the idea of overthrowing the government became mainstreamJoe Biden’s Gun Policy Could Tax Gun Owners $200 for Every ‘High-Capacity’ Magazine They OwnREPORT: Concealed Carriers Grow Nearly 20 Million During Trump TermBest Pistol Targets To Sharpen Your Handgun Skills (2020)
Gun And Survival
Skip to content 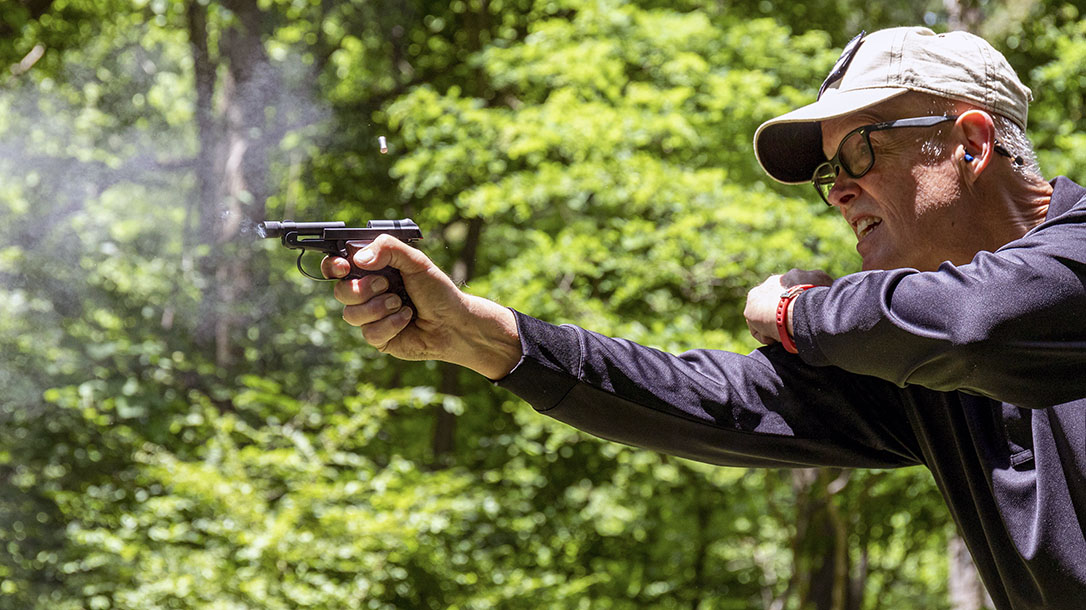 Beretta is the oldest continuous firearms fabricator in the world. Through the centuries the company has manufactured all types of firearms, but it wasn’t until 1920 that they started to produce small pocket pistols. The first was the Model 1920 in .25 ACP, which was a blowback self-loader with a concealed hammer and exposed barrel. An improved variation called the Model 418 was the choice of British Agent 007, James Bond, in the early Ian Fleming novels.

The little Beretta .25 semi-autos were popular in America, but the Gun Control Act of 1968 put the skids to their importation. Beretta USA came into being in 1980 and shortly thereafter the Model 950B in .25 ACP was in production domestically. It evolved into the Model 21A in 1988, and in 1994 it became available with an aluminum frame and was called the Bobcat. The newest rendition is the Model 21A Bobcat Covert in .22 LR.

The Model 21A Bobcat Covert can trace its lineage back to the Beretta Model 20 that was introduced in 1968. Prior to this, the small Beretta .22 and .25 pistols had a single-action (SA) mechanism. However, the Model 20 was produced in double action (DA), offering more safety and security when a round was carried in the chamber. The Bobcat Covert continues along this line. It can be fired by a pull on the long, stiff DA trigger or the exposed hammer can be cocked and the pistol fired SA. In this mode, the trigger has a bit of take-up before breaking at 5.8 pounds. There’s a frame-mounted thumb safety, which can be pushed up into the “safe” position to allow the gun to be carried in Condition One.

Like all the small Beretta pistols, the front half of the slide doesn’t cover over the barrel. The gun’s 2.9-inch barrel has a downward extension up by the muzzle that is pinned into the frame, producing a hinge. On the frame, just behind the trigger is a small latch. Pushing this latch forward unlocks the barrel, which can move upward on the hinge, exposing the chamber.

Threaded for Suppressor Use

Additionally, the muzzle of the new Covert has standard 0.5×28 threads to allow the use of a suppressor, and a knurled thread cap protects the muzzle when a suppressor isn’t in use. A “half-moon” front sight is integral to the barrel. The steel slide is serrated at the rear to aid in slide retraction, and there is no extractor as the blowback action serves to toss the empty case out of the chamber.

The aluminum-alloy frame only has the two previously mentioned controls. There is no slide stop, so the slide doesn’t lock back on an empty chamber. The exposed hammer spur is rounded, pierced and has tiny serrations. Both the backstrap and frontstrap of the grip frame are serrated; the upper-rear portion of the backstrap has a beavertail projection. The attractive two-piece walnut grip panels are checkered with a laser-cut Beretta logo. On the left panel, just above the butt, is a dished-out area that surrounds the push-button magazine release. The single-column magazine holds seven .22 LR cartridges. A Bruniton finish protects the slide and barrel, while the frame finish is a matching matte black. There’s also a Model 21A FDE version with a flat dark earth Cerakote finish.

Several of the Covert Bobcats features can, in my opinion, serve to make this little pistol viable for those whose age and/or infirmities make operating a handgun difficult. Ergonomically, it fits my medium-sized hand like a glove, plus it is lightweight and compact. Since the Covert is blowback operated, the recoil spring must be fairly heavy in order to keep the slide in battery when the cartridge is fired and chamber pressures are the highest. This means that the slide is somewhat difficult to retract for loading. No worries though, the loaded magazine can be inserted into the magazine well and then the barrel latch can be pushed so the barrel pops open on its hinge. A round can be loaded in the chamber or kept in readiness for loading when needed.

I’ve mentioned the stiff DA trigger pull. This can be negated by manually cocking the hammer and then pushing the safety up into the “safe” position. To fire the Covert, all that needs to be done is place a cartridge in the chamber, press the barrel down and then press the thumb safety lever down into “fire” position, which exposes a red half-circle on the slide. Now, take up the slack and finish the SA pull on the trigger.

To pack around the Bobcat Covert, I elected to use the new Fastrax Pac Waistpack from Galco…the “fanny pack” is back. I was sent a model that will fit many small auto-loaders and revolvers. The body of the pouch is made of ballistic nylon and has zipper closures on top and in the front. There are two zipper pulls on the upper zipper so the pouch can be opened on the right or left side. Inside the main pouch is a holster made of a synthetic, leather-like material. It is connected to the pouch and hinged, so that a pull-cord extending outside the pouch on the side can be pulled, which raises the holster to a vertical position, allowing the gun to be drawn. The Fastrax Pac comes in a black/gray color in nylon and a black leather version has just recently been added.

To see how the Bobcat Covert would handle with the added length of a suppressor, I ordered an inert model from Gemtech. The GM-22 has the look, feel and weight of the real thing, it just doesn’t suppress sound.

Experienced shooters know that a .22 LR firearm can be picky as far as ammunition is concerned. As the Model 21A Bobcat Covert is not a target gun, I did not plan to use target-type .22-LR ammunition, opting for only high-velocity loads from CCI, Federal, Remington and Winchester.

With my Oehler Model 35P chronograph assembled, all six brands/types of test cartridges were shot through the sky screens to get a reading. Not unexpectedly, the Winchester Varmint HE, with its 37-grain bullet, was the only cartridge to average four figures. It also caused feeding and ejection problems beginning with the first five rounds.

For accuracy, shooting was done from the bench using a sandbag rest at 10 yards due to the sights and short sight radius. Shooting was done SA, and three five-shot groups were fired with each load. The tightest five-shot cluster was 1.46 inches with the Remington 40-grain solid “Golden” cartridges. The little Beretta tended to shoot low and slightly left. I was surprised that group averages were all under 2.5 inches. The Winchester Varmint HE loads grouped well, but with continuing malfunctions in the Covert, I eliminated it from further use.

For a practical shooting exercise, I put up a large oval-shaped bullseye from HD Targets and added a smaller 8-inch bullseye target to act as the head, making a “sort-of-silhouette.” Beretta had sent me two extra magazines (the Covert comes with just one), so I loaded them up with the CCI and Federal .22 HP rounds. The third magazine I loaded with the Winchester M*22 cartridges.

I loaded the Beretta Bobcat and put on the Galco Fastrax Pac, placing the pistol inside the swivel holster and zipping it up. Then I presented the Covert from the fanny pack and fired three shots from 3 yards, two center mass and one to the head. Next, I moved back to 5 yards and repeated this process. Lastly, from 7 yards I fired the last two shots center-mass. I didn’t use anything other than a flash sight picture, but two-thirds of my hits were in center scoring areas.

Returning to my musings about a bedside table ready condition for the Bobcat Covert, I performed an experiment to see if this idea was indeed doable and real-world. I set the Beretta up with a loaded magazine, the barrel popped up, a round laying loose by the gun, and the hammer cocked and locked. I simulated a sleep position with my head near the bench and on signal, I looked behind me at another silhouette target I’d made, determining a threat. Almost simultaneously, I reached for the Beretta, inserted the round in the chamber, pushed the barrel closed, swung on the target, took the safety off and fired. The target was about 5 yards away like an across-the-bedroom shot. My best time was 3.92 seconds.

I next attached the inert Gemtech suppressor to the Beretta Bobcat Covert. With the suppressor in place, the miniscule sights cannot be used at all. Your best bet is to line the pistol up as straight with the intended target as possible and keep the shooting distances short. The fact that I was able to make good hits on the target at 5 yards is attributable to the fact that this little Beretta fits my hand so well and points so naturally.

Have Gun, Will Travel

Rule #1 in a gunfight is to have a gun. Rule #2 in my book is to have a reliable gun. With a small blowback pistol such as this, you must have a carry cartridge that’s going to work every time. If that round has a solid point bullet, so be it. Also, obtaining a smooth draw of the Beretta from the Galco Fastrax Pac will take practice, practice, practice.

If you’re a neophyte to the handgun world, the Beretta Model 21A Bobcat Covert might not be appropriate as a first choice for defense. I think it can do the job if the shooter is willing to put in the time and practice. Being a .22 rimfire, you can shoot tons of ammo without going broke. It is fun to shoot and could make a fantastic plinker.

This article is from the November-December 2020 issue of Combat Handguns magazine. Grab your copy at OutdoorGroupStore.com.