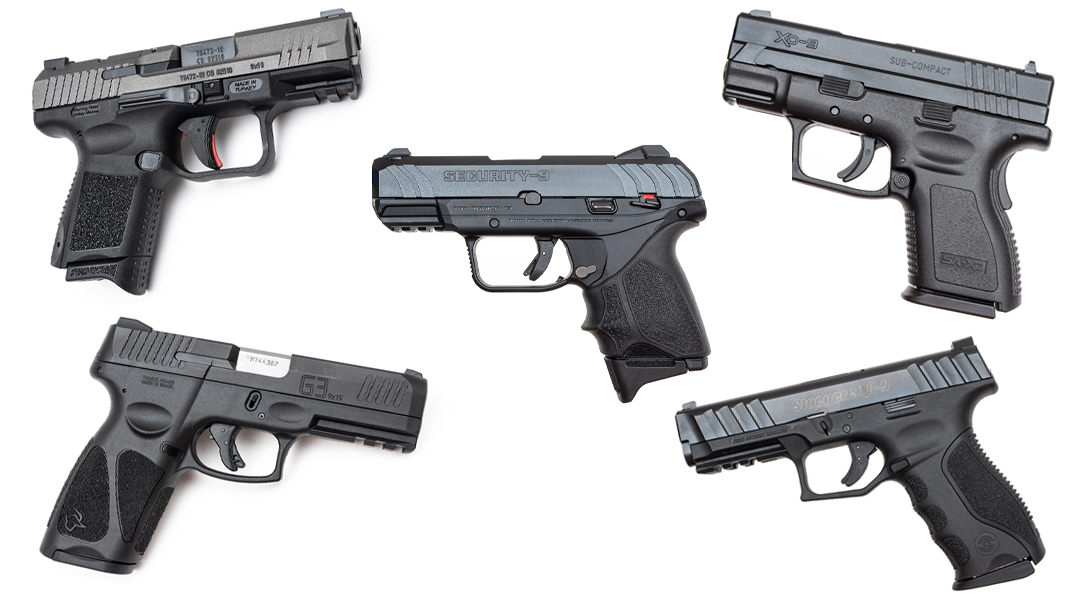 For some families, spending an extra $600 to $1,000 on a top-tier defensive pistol isn’t really a viable option. Not everyone’s lifestyle is defined by firearms. Whether it’s about keeping food on the table or prioritizing money for other activities, many folks can only spare so much cash for a quality defensive firearm. But pistols under $500 change the conversation.

That’s why we’re going to look at five “value-priced” 9mm pistols that still offer plenty of features and performance without busting a budget. I used a few criteria to create this list: The pistols had to have come out in the past year, their MSRPs are under $500, and their magazines hold at least 10 rounds.

Without question, polymer grip frames have drastically altered the landscape of what’s available to American consumers, resulting in firearms that are cheaper to produce and purchase. All five 9mm pistols in this review have polymer frames, and all but one are striker-fired. But each has its own strengths that makes it stand out from the rest.

The Security-9 Compact is deceptive in its appearance, since it looks a lot like a striker-fired pistol, especially with its trigger safety. However, it uses Ruger’s hammer-fired “Secure Action.” Racking the slide partially cocks the hammer before the trigger pull finishes the cycle and fires a round.

This particular model (3829) packs 10+1 rounds inside a fairly compact package. It also comes with a Hogue grip sleeve that adds some girth but provides excellent control and helps insulate the user from felt recoil. The slide is made of through-hardened alloy steel and wears a blued finish. This is decent but not quite as corrosion resistant as other finishes, such as Melonite or Cerakote. The slide is also beveled all over for a snag-free draw and easy one-handed reholstering. The white-dot front sight is paired with a drift-adjustable, white-outlined rear sight.

Despite its budget price point, the Security-9 Compact features front and rear cocking serrations for easy slide manipulations, a Picatinny rail and a reversible magazine release. A few corners were trimmed with the controls, including the slide lock and magazine release. These were a bit undersized and tricky to manipulate at times, though with the two magazines, the Security-9 Compact is a fairly complete piece of kit for the price. (ruger.com)

Despite its “value” price point, the Taurus G3 offers a full complement of popular features, including front and rear cocking serrations, a beveled slide and a Picatinny rail for accessories. The G3 is dimensionally similar a Glock 19, though one variant ships with a 17-round magazine in addition to a 15-rounder.

The pistol is extremely comfortable to hold and shoot thanks to the skateboard-tape-style grip texturing. In addition to the texturing, the G3 also offers thumb shelves on both sides for increased control as well as memory pads on the frame, above the triggerguard, for the index finger.

Among striker-fired pistols, the G3 is unusual in its restrike capability. This means that if a round doesn’t fire when you pull the trigger, you can pull the trigger a second time to try again. The slide does not have to be cycled for another trigger pull. While we’re on that topic, the trigger pull itself feels a little like a double-action revolver’s, though it’s lighter and considerably better. In fact, the average pull weight on my test gun was only 5.3 pounds.

There’s nothing missing from the G3 that you would find on standard pistols selling for much more. There’s even a 1911-style thumb safety for those who want the extra level of security. And it offers a reversible magazine release as well. The G3 should be a definite consideration for those looking to get the most for their money. (taurususa.com)

While the TP9 Elite SC is this second most expensive pistol in this review, it comes with two interchangeable backstraps, a kit for installing a miniature reflex sight, a holster, spare parts, a 12-round magazine and a 15-round magazine. Even better, the slide is milled in such a way that adding a reflex sight does not interfere with the rear iron sight.

The Canik also offers tactical features such as front and rear serrations and a Picatinny rail. The slide also wears a tungsten Cerakote finish to resist corrosion and wear, and Canik pairs the white-dot front sight with a serrated, all-black rear sight. The gun also stands out from the pack with an oversized, ambidextrous slide release as well as a reversible magazine catch. The grip texturing is effective, though I found it a little too subtle. The rest of the ergonomics are excellent, with thumb shelves and relief cuts that promote a high grip.

But the TP9’s real claim to fame is the exquisite trigger, which had just a bit of stacking on the take-up and then a crisp break at around 3.5 pounds of pressure—the lightest pull in the test group. (centuryarms.com)

Atop the price ladder for this review was the STR-9 package, but it also came with the most accessories. At $449, this particular variant (31722) ships with three 15-round magazines, tritium sights, three interchangeable backstraps and a magazine loader. However, for the price-conscious buyer, the base model (31720) can be had for $329 with just one magazine, one backstrap and standard three-dot sights.

The STR-9 straddles the line between a compact and full-sized pistol and is dressed to the nines with all the tactical features one could want. It has the most aggressive and visually appealing front and rear slide serrations of the group as well as a full-sized Picatinny rail and a reversible magazine release. It’s also a striker-fired pistol, but there’s no external safety other than the trigger’s blade safety. This shouldn’t be a problem, as the trigger was relatively stiff and had the heaviest pull weight of the group at 6.2 pounds on average.

The grip frame is extremely comfortable with custom-fit backstraps and grooves and curves similar to an HK VP9’s, though the texturing is a bit more aggressive. Generous relief cuts promote a high grip, placing the shooter’s hand closer to the bore axis for enhanced control, and the triggerguard is oversized. It’s apparent that the folks at Stoeger really paid attention to the details in crafting this pistol. (stoegerindustries.com)

The Springfield XD 3” Sub-Compact is the most affordable option in this review while still being a solid defensive option. The slide isn’t as streamlined and only has rear serrations, but the tough Melonite finish provides exceptional wear and corrosion resistance.

Despite the relatively short grip, which leaves my pinky tucked under the magazine baseplate, the XD 3” Sub-Compact carries a staggering 13+1 rounds, though the pistol ships with only one magazine. Love it or hate it, the most unique feature is its grip safety, which adds an extra layer of security over the trigger safety. It’s a little controversial for some people, but I like it for the most part. It’s especially comforting to me considering the trigger has a relatively light break weight of around 3.75 pounds. The break is just a hair soft but still quite nice and light.

The frame offers good ergonomics and promotes a relatively high grip, but the texturing is almost non-existent on the sides, making it somewhat slick in the hand. The three-dot sights are serviceable, and the magazine release is ambidextrous. All in all, for the price, the XD 3” Sub-Compact is a good choice as a defensive pistol, especially with the years of tried-and-true reliability of the XD platform behind it. (springfield-armory.com)

Range Notes for the Pistols Under $500

I hit the range with two friends to test these pistols under $500 and compare their capabilities. Off-hand, both the Ruger and Canik consistently shot the most accurate groups for all three of us, even using an assortment of ammunition. With both pistols, I was able to repeatedly shoot 1-inch groups at 10 yards off-hand; that’s not bad considering their subcompact size. I definitely liked the Canik’s trigger the best. It had a clean and light pull that didn’t impact my ability to keep the sights on target. I also preferred the Canik’s ergonomics and handling. It pointed naturally for me and was incredibly easy to shoot well.

For me, this gave it the edge over the Ruger, which had a sharp trigger safety that poked into my trigger finger, especially during recoil. That became fairly annoying after a number of shots. Even so, the Ruger had the size advantage for concealment, with its slender profile and small footprint. This is especially true if the “girthy” Hogue grip sleeve is removed.

The Taurus and Springfield had very good trigger pulls, with the latter being the better of the two. However, the Springfield’s accuracy was the weakest of the bunch. Also, with its beefy slide, there was a fair amount of muzzle flip. Even so, that deficit was offset somewhat by its generous 13-round capacity.

More Range Time With the Pistols Under $500

On the other hand, the Taurus’ texturing provided excellent control during recoil. It also produced good groups off-hand at 10 and 15 yards, but the sights were quite small and difficult to pick up quickly. The thumb safety was positive but easy to manipulate and might work well for those familiar with 1911-style pistols, though using the safety isn’t required.

The Stoeger was very comfortable to shoot, though it seemed to have a bit more muzzle rise as well. The magazines also tended to hang up and not drop free on their own during reloads. While the Stoeger provided a good sight picture and was capable of good accuracy, the shooter had to work through the trigger to achieve that potential. For lack of a better word, the trigger pull was a little weird. It was stiff on the take-up and had a heavy but crisp break.

That said, all of these pistols under $500 were more than capable of competently addressing a threat at realistic distances, especially with some training. Even better, all of the sample pistols were 100-percent reliable during the test with both FMJ range ammunition and premium hollow-point offerings. We didn’t experience a single malfunction during the review.

With modern manufacturing, it’s an awesome time in the shooting industry for value-oriented consumers who don’t want to sacrifice performance or peace of mind. Whether you’re looking for an all-in-one kit, great ergonomics, high capacity or the ultimate hideout piece, one of these fine pistols will fit the bill—and your budget.

This article on new pistols under $500 is from Personal Defense World magazine. Digital and print subscriptions available at OutdoorGroupStore.com.

Judge rejects the NRA’s bid to block New York’s lawsuit as not in ‘good faith’ — here’s what happens next
Daylight launches #CallMeByMyName to call for improved access to financial services for trans and non-binary people
U.S. judge tosses NRA bankruptcy bid, letting New York seek dissolution
The 2nd Amendment: An outdated fantasy for small minds
In These 11 Cases, a Firearm Saved the Owner or Others