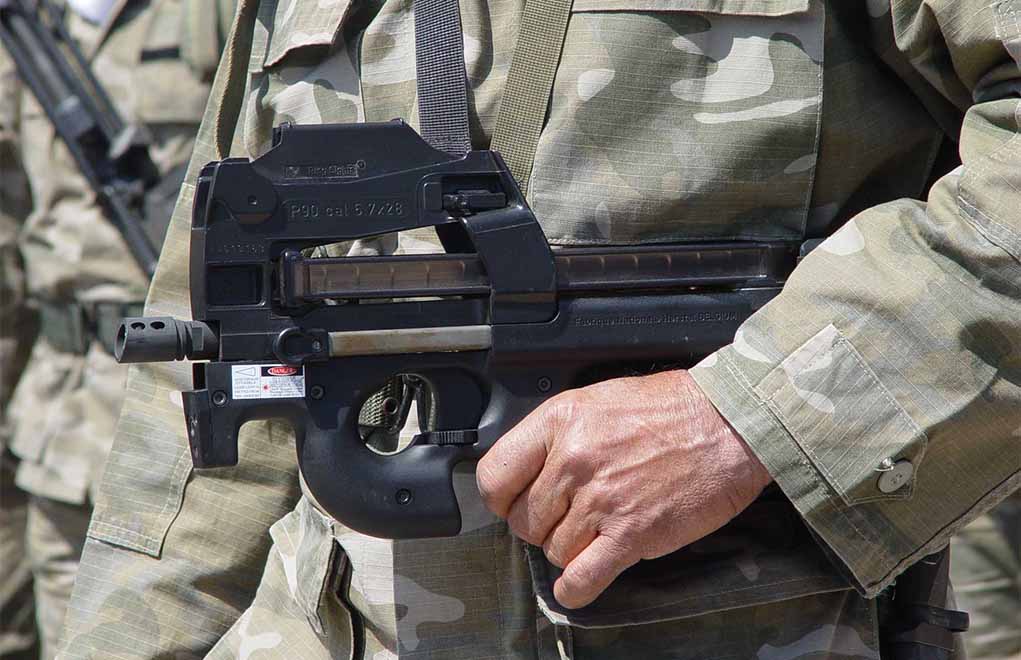 Compact and nimble, there are certain advantages in wielding a bullpup rifle. We give you five of the best to take aim at.

What Are The Top Bullpup Rifles:

Unconventional firearm designs are legion, but none quite stir emotions like the Bullpup. Those sentiments generally are abject hate or relative indifference in most, undying love in a select few. Those who pledge their hearts to this ugly dog do so without reservation.

While the Bullpup has never come to equal its more traditional counterparts in popularity, it has built a dedicated enough following to keep kicking for more than 120 years. Yes, you heard that correctly.

The concept of moving the action behind instead of above the trigger wasn’t some spawn of a Buck-Roger’s addle mind. Roughly pegged, the Bullpup is an early 20th-century concept with the Thorneycroft Carbine considered the first example of the design. To be fair, others also played around with the idea before the bolt-action .303 British made its appearance in 1901.

It’s also safe to say, with material and mechanical advancements over the past 100 years the concept has come into its own. Other than stature, the Thorneycroft had everything it took to make the Bullpup concept a dusty novelty. Though, it did accomplish the one thing it aimed at—shrinking down the overall length of a rifle.

Overall the system is more compact than traditional configurations and, in many cases, retains a full-length or near full-length barrel. That’s a potent combination. Not only is the gun more deft in close quarters, but has the ability to go long if need be.

Size is one gold star for the bullpup, but the design has other assets. Arguably it’s nimbler and more controllable than more traditional designs, a function of hand position nearer to muzzle. And, in some opinions, easier to manage over longer periods, given the mass of the rifle is closer to the body, instead of in front of it. Pretty solid points in the design’s favor.

Not Always A Good Dog

Despite these admirable qualities, the Bullpup isn’t all peaches and cream. Tradeoffs are the name of the game in firearms and there are some with the compact rifle.

Historically, poor triggers—with a load of creep—have plagued the design. Conversion kits for standard configuration rifles are notorious for this trait, turning to linkages and extensions to lengthening pull, subsequently making it squishy.

Lefties also tend to get the shortened of the stick with Bullpups. By and large, most are configured for right-handers, with brass ejected that direction.

For southpaws, the matter is further complicated due to many examples of this configuration ejecting spent brass downwards. This means a face or, perhaps, a shirt full of hot brass. Some more recent designs have dealt with this, angling the ejection upwards and away from the shooter.

The final issues walk hand in hand. Bullpups are tail heavy since the magazine is located behind the trigger, thus the design tends to enhance muzzle rise. Furthermore, the placement makes these rifles slower to load. Though, familiarity with the weapons system goes a long way mitigating both.

No bullpup rifle list is complete without the Steyr AUG. Among the most widely adopted rifles in this configuration, the space-aged iron has more than proved its worth in militaries and law enforcement worldwide.

The AUG A3 M1 is the semi-automatic civilian version of Steyr’s military rifle and a tidy package. A very compact rifle, the 5.56 NATO A3 M1 measures in a tick over 28-inches in overall length, with a carbine-length 16-inch barrel. Longer aftermarket options are available if you look to extend its range. Additionally, the short-stroke piston operated rifle tips the scales at a very manageable 7.7 pounds.

The recognizable rifle has a few advantages, not the least it can be configured for left-handed shooters. Big plus. Furthermore, Steyr has excellent optics mounting options, including a long or short Picatinny rail and 1.5x or 3x integrated optics.

The controls of the AUG are very intuitive as well, safety above the grip, mag release behind and charging handle at the fore. It’s different if all you’ve run is an AR, but easy to learn.
MSRP: $1,999, steyr-arms.com

When shooters think about modern Bullpup rifles, Israel Weapons Industries’ Tavor is probably what comes to mind. Among the most popular options on the civilian market, the Tavor X95 is decked out for top performance by anybody who gets behind its trigger.

Starting there, the rifle has a downright excellent trigger, breaking at a crisp 5 to 6 pounds. For Bullpup fans, this is worth the price of entry alone. But the 5.56 NATO rifle has more to offer, including ambidextrous controls, ample optics rail as well as rails at the 3-, 6- and 9-o’clock positions, STANAG magazine compatibility and plenty of sling mounting points.

Ergonomics are right on the money too. An ample fore-end facilitates the utmost control and makes transitioning targets frighteningly quick. Given the Tavor is a kitten in the recoil department, you can make its nimbleness pay off.

As to the tale of the tape, the rifle boasts a 16-inch barrel and is a compact 26-inches in overall length. The long-stroke operated X95 weighs in a very comfortable 7.9 pounds. Hefty enough to make it extremely manageable, particularly shot to shot. Overall, there are few nits to pick with what IWI offers up in the X95.
MSRP: $1,999, iwi.us

FN’s little bullpup might be the cutest rifle on the list, but don’t be fooled. It has teeth! True enough, chambered 5.7x28mm, the rifle might not be the top-choice for self-defense. Nonetheless the cartridge is deadly as a Mohave rattler when hits are precise. And the PS90 gives you plenty of chances to hit, loading 10 and 30-round magazines.

If compact is the key asset you’re searching for, the FN Bullpup has it in spades. A scant 26-inches in overall length, the 16-inch barrel rifle is ideal in close quarters and plenty quick at the shoulder. It’s also light, weighing in a just over 6 pounds. That said, given the 5.7 is a tame cartridge to begin with the PS90 is substantial enough to all but eliminate any recoil. Read, it’s a fast and accurate shooter.

Ergonomics of the PS90 are a sticky point for some—especially the swept thumbhole stock. It works but is such a marked break from what’s considered typical comfort can take time.

Reloads require similar adaptation too, given the magazine loads on the top of the rifle. Strange as it might sound, this potentially makes the rifle quicker than traditional Bullpup systems, given the greater access. Unique as all get out, the PS90 is both fun and deadly serious.
MSRP: $1,589, fnamerica.com

Desert Tech made its name with long-range rifles, but has shown more than proficient with carbines since the release of MDRX. A top-dollar option, the Bullpup rifle proves value to those who not only want performance, but also versatility. Where that plays out is the MDRX’s ability to jump calibers. Requiring only minutes to convert, the platform puts four calibers in your hands—.223 Wylde, .308 Win., .300 Blackout and 6.5 Creedmoor.

The rifle tends on the heavy side, weighing in at a hair under 9 pounds with a 16-inch barrel. Still it proves extremely trim in size. At 26-inches in overall length, the MDRX is agile, particularly with plenty of real estate upfront for the support hand. It’s also manageable, even in a .30-caliber configuration. An absolute kitten, no; but, the rifle is more than capable of quick and accurate follow-up shots in skilled hands.

Desert Tech has improved the trigger over the years, striving for crispness and predictable. And the company has included all the amenities you’d expect in a modern rifle system: ambidextrous controls, plenty of optics rail space, threaded muzzle (it comes with a brake) and STANAG magazine compatibility.

Even more appealing, depending on the caliber, you have the option to choose the MDRX’s ejection style—front or side. This proves a bonus for lefties who don’t care for hot brass in their face.
MSRP: $1,889, deserttech.com

Kel-Tec has always had a different take on firearms, which makes it a natural to take on the bullpup. The RDB line is the result, though we tend toward the standard model RDB17. What makes the rifle appealing is the flexible configuration and downright affordable price tag compared to much in the niche. An excellent combination.

As to what you get in the bullpup, a short and stout 5.56 NATO with some extras that make the rifle particularly appealing. In addition to STANAG magazine compatibility, it boasts an adjustable short-stroke piston system, top and bottom Picatinny rails and very intuitive controls. The safety mimics the AR-15 in function and placement and the magazine release is very quick to operate via a paddle behind the grip.

The rifle is fully ambidextrous, including how the rifle spits spent brass. Ejecting spent case below the buttstock, the system eliminates what is typically the greatest bullpup bane for lefties.

As to size, the RDB17 hits all the right notes. The 16-inch barreled rifle comes in just north of 27-inches in overall length and tips the scales at 7-pounds flat. Ample foregrip aids in getting the most out of the compact package, endowing the gun with an abundance of agility. And the mild nature of the 5.56 cartridge lets you take full advantage of its fast target transitions.
MSRP: $930, keltecweapons.com

Editorial | Self-defense laws need to be clearer
First Look: Springfield Armory Ronin EMP
The NRA may win this long gun game even if it seems to be in a terrible strait
Under $50 Bushcraft Knife – The Condor Terrasaur Rocks!
We may be at an inflection point for political violence in the U.S.