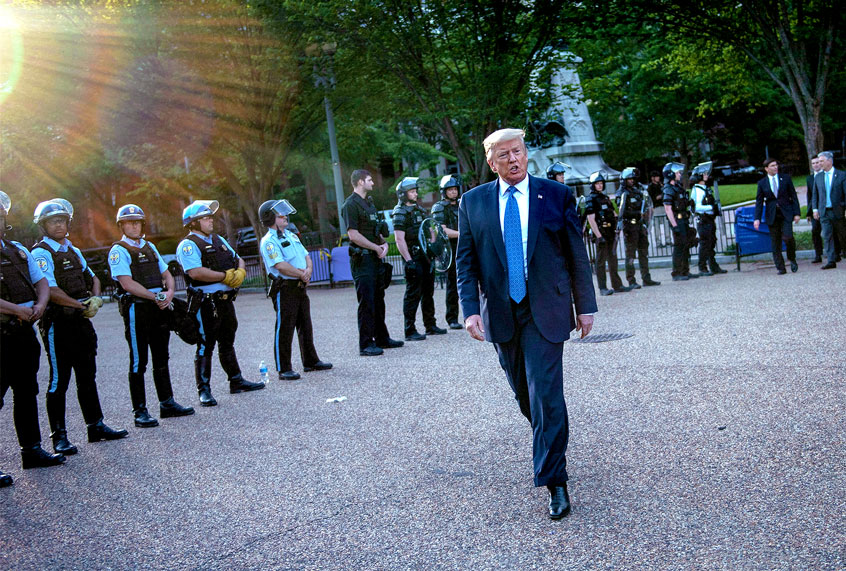 We’re now more than a week into the White House’s attempts to rationalize Donald Trump’s choice to tear gas peaceful protesters in order to clear the way for a photo op, and the excuses aren’t getting any better. Officials can’t even decide on one lie to tell, ping-ponging between denying the violence against protesters was that serious — the event was extensively documented — to claiming it was justified. The latest excuse from Attorney General Bill Barr, who previously tried to deny he ordered the action, somehow falls into both camps.

“[T]he President of the United States should be able to walk one block from the White House out to the church of presidents,” Barr told Bret Baier on Fox News Monday night in an attempt to paint the use of painful force against peaceful protesters as simply necessary.

White House officials can’t settle on a coherent narrative for a simple reason: Trump’s decision to tear gas protesters exposed the lie behind his tough-guy preening, showing that he’s actually a sniveling coward underneath.

Indeed, the entire right wing reaction to the protests has served as a lengthy demonstration of a central truth, which is all that right wing manly man bravado is an act put on by people who are, in fact, a bunch of weenies who pee themselves in fear at the sight of protesters in the streets.

Moreover, it’s the progressives who have been derided for years as “soy boys” and “easily triggered” who have shown the physical and moral courage required to hit the streets, at risk of being gassed or beaten, in order to stand up for what they believe in. And protesters are doing this with only bandanas for protection, while the cops get to hide behind body armor and gas masks.

No doubt Trump imagined himself looking like the conquering hero as he strode across Lafayette Square in the wake of the violent dispersal, but the entire debacle just ended up reaffirming the hated nickname “Bunker Boy” — a man so thin-skinned that he resorted to ordering police to tear gas protesters just so he didn’t have to be heckled by them.

Trump’s “Bunker Boy” act echoes a larger truth about the American right, and especially the toxic masculinity that is its beating heart: All that tough guy posturing is a pathetic effort to conceal the fearfulness that defines conservatism.

Trump’s entire political career has been based on pandering to the staggering amount of fear that motivates the American right: Fear of people who are different from them, fear of big cities, fear of change. So many self-identified tough guys on the right melt down at the mere thought that a woman might feel empowered to talk back. And the racism that Trump provokes is fear-based, as well, driven by white people who are afraid that they’ll be exposed as mediocre if they have to compete with people of color on an even playing field.

And, of course, the right wing obsession with the police is about cowardice. It’s so rooted in their fear of the world — and especially of people of color — that they hide behind an army equipped with tanks and shields and guns and other projectile weapons meant to inflict maximum damage on people while protecting itself from physical risk.

And the fearfulness that has created this situation has been exposed, time and again, during these protests. Cops justify unleashing gas and rubber bullets on protesters because a few empty water bottles were thrown at them, as if water bottles were the most dangerous weapon known to man. Right wing vigilantes have been ramming protesters with their cars, hiding behind a ton of metal while the brave protesters stand on the streets with no protection at all. And fearful conservatives quiver at home, screeching about “looting and rioting” while their progressive friends and relatives take to the streets and risk being assaulted by police.

On Thursday, a 75-year-old man named Martin Gugino in Buffalo, NY, showed the world what courage really looks like when he, without any protection, approached a squad of baton-wielding and face-shielded cops. An officer pushed him onto the ground, and as a pool of blood formed under the man’s head, cowardly cops walked by, afraid to even acknowledge what had happened by rendering aid. Gugino was hospitalized as a result.

Trump, still bunkered up behind walls and security, responded Tuesday on Twitter by defaming Gugino, a peace activist who also volunteers as an advocate for affordable housing:

Buffalo protester shoved by Police could be an ANTIFA provocateur. 75 year old Martin Gugino was pushed away after appearing to scan police communications in order to black out the equipment. @OANN I watched, he fell harder than was pushed. Was aiming scanner. Could be a set up?

But of course Trump would lie about Gugino. The contrast between the two men, who are nearly the same age, couldn’t be more stark: Trump is a coward who talks a big game on Twitter but is so afraid of the outside world that he had protesters gassed so he didn’t have to look them in the eye; Gugino, despite his age, showed true courage in attending a protest against violent police, and the police were caught on camera demonstrating just how dangerous it was for him to be there.

No doubt Gugino’s actual courage makes a coward like Trump feel small, and like all cowardly bullies everywhere, Trump is reacting with lies and abuse.

That conservatism is cowardice hiding behind a tough-guy visage has always been true. Look at the NRA, which has always marketed guns with combination of hyper-masculine bravado papered over a sea of racist fearfulness. And the Trump slogans that right wingers love, like “build the wall” and “make America great again,” are all about their fears of difference and change. The main defining feature of conservatism has long been cowardice, and the camo and guns cosplay merely overcompensation for it.

One of the most powerful passages in “Game of Thrones” by George R.R. Martin is an exchange between Ned Stark and his young son Bran, when Bran asks, “Can a man still be brave if he’s afraid?”

Ned answers, “That is the only time a man can be brave.”

The point of this exchange is simple: Courage isn’t about being free of fear, but about facing your fears and doing the right thing anyway.

Protesters are scared. Of course they are. Plenty of them have been assaulted. Some have been permanently injured. A few have been killed in incidents related to or adjacent to protests in different cities. But so many people are powering through their fears and going out anyway.

What Trump and his supporters are isn’t brave. They are bullies. They shy away from any fight that isn’t about them punching down. They point guns at people armed with empty water bottles, hide in their cars while ramming crowds, hunker behind walls and face shields while throwing out tear gas.

Trump never really picks on someone his own size — ask the dozens of women who have accused him of sexual assault — and he sends his lawyers to deal with the thousands of people he has screwed over in his time. The man has likely never had a moment of true courage in his life. Fans who are thrilled by his bullying ways are just exposing that they’re as big of cowards as he is.