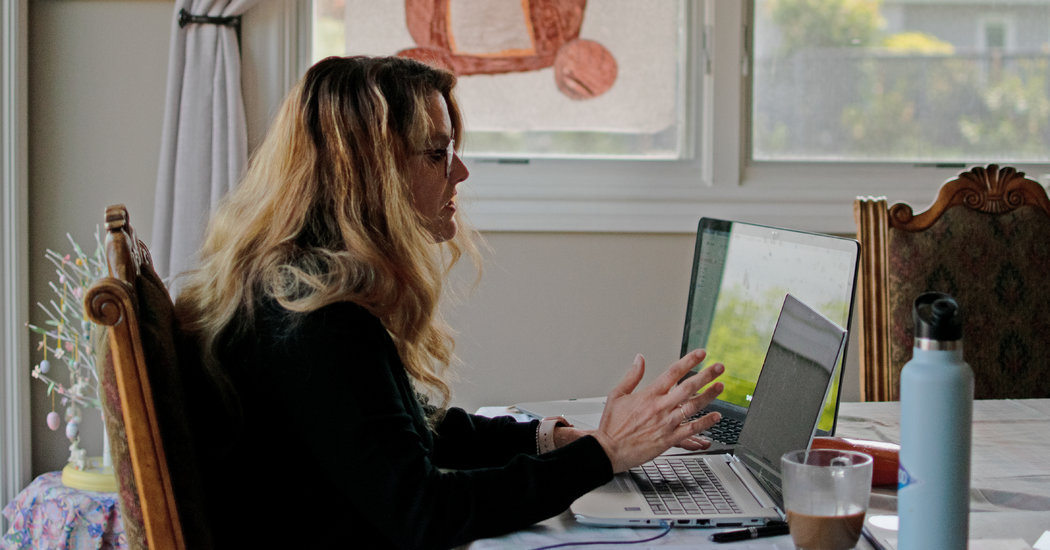 LOS ALTOS, Calif. — A veteran prosecutor in Northern California has turned her kitchen table into an improvised command post where she is enforcing Santa Clara County’s strict lockdown order.

Monitoring two computers and a cellphone, Angela Alvarado, the prosecutor, must balance individual rights with infection control every time an email alert notifies her of another complaint:

A private airport is offering flying lessons. Is that OK?

People are playing tennis at a public court. Is this allowed?

A rabbit rescue shelter is hosting a nail-trimming event for bunnies. Is that really essential?

Ms. Alvarado, who is part of a team of lawyers dedicated to monitoring and responding to complaints, hates having to decide whether rabbit lovers can gather to trim bunny nails. (She said maybe.) She hates having to rule on whether people can play tennis or take flying lessons. (She said no, and no.) She cannot believe how many hours she has spent tangling with a local BMW dealer over the question of whether test drives are legal right now. (She has held firm on no.)

She said she has reached the point where it is a relief when complaints come in with too little information for her to take any action. “I don’t feel comfortable being in that position of saying, ‘You know, your constitutional rights don’t really matter right now,’ but I’ve had to,” she said.

“Right now we’re putting parts of the Constitution on hold. We really are. Freedom of assembly. Right to practice religion.”

It is a remarkable acknowledgment from a woman who has spent 21 years upholding the law in Santa Clara County. But the law, she said, seemed so much clearer when her work mostly involved prosecuting sex offenders. “This isn’t prosecuting a bad guy,” she said. “This is prosecuting a place I get my coffee. It’s not fun choices to make here.”

The complaints keep pouring in, hundreds every week, and so Ms. Alvarado, 47, sits at her sunny kitchen table making choices, figuring out which complaints are serious enough to dispatch police officers to confront business owners and, if necessary, threaten them with citations if they do not comply with the county’s shelter-in-place rules.

The email inbox chimes yet again. “That’s the sound of doom, right there,” she said, chuckling.

As she evaluates complaints, her two children play in a back room. A poster made by her 8-year-old daughter is taped to a window so it faces the street. It depicts a teddy bear holding a heart. “Stay home, save lives,” her daughter wrote in bright colors across the top, succinctly summarizing the point of this strange exercise.

Santa Clara County was one of the first coronavirus hot spots in the nation. At least 131 people have died there and more than 2,300 have tested positive. Recent testing has revealed that the earliest known death from Covid-19 in the United States happened in Santa Clara County on Feb. 6, just a week after the county reported its first infection. It now appears likely that the virus was circulating in the area for much of January, long before the danger was recognized, which may explain why the county emerged as the initial center of the outbreak in California.

Along with six other Bay Area counties, Santa Clara County responded by imposing the nation’s first shelter-in-place order on March 17. Soon after that, the county assembled a team to manage enforcement, dedicating about two dozen staff members from the district attorney’s office, drawn from the ranks of prosecutors and investigators whose usual beats include prostitution, child abuse and truancy violations. Each of the team’s seven lawyers — Ms. Alvarado included — takes turns monitoring and responding to complaints.

“They were ahead of the game in terms of reacting, trying to figure out what the heck to do with this pandemic,” Nancy O’Malley, president of the California District Attorneys Association, said of Santa Clara County’s prosecutors.

But with protests and legal challenges against lockdown orders now erupting all over the country, Ms. Alvarado offers a glimpse at the growing discomfort felt among those responsible for enforcing orders that so plainly deprive their fellow citizens of bedrock freedoms.

The discomfort extends to her boss, Jeff Rosen, the district attorney for Santa Clara County, who described his deep reluctance to actually prosecute anyone for violating the lockdown order. “I didn’t become D.A. to put people out of business,” he said. “But lives are at stake.”

Indeed, Santa Clara County’s interpretation of its public health order is one of the most restrictive in the state. Recreational marijuana, for example, can be sold from stores in neighboring Alameda County, but only home deliveries are allowed in Santa Clara County. When a clever cellphone shop tried to stay open by adding bottled water and granola bars to its inventory, Mr. Rosen’s lockdown enforcers said no way.

Mr. Rosen has instructed his team to avoid issuing citations except in cases of intentional defiance. He would prefer to use what he calls “soft power” — persuading without prosecuting. Usually it works.

On the day the shelter-in-place order took effect, residents complained to police officers in the city of Mountain View that there were long lines outside Eddy’s Shooting Sports, a gun shop sandwiched between a barber shop and a nail salon in a strip mall. Officers visited the shop that day and told the owner to close. He refused.

That is when Ms. Alvarado got involved. The county threatened a misdemeanor charge that carries a $1,000 fine and potential six months imprisonment. Eddy’s closed.

“This public health order is in response to an emergency in an extreme crisis, and a lot of constitutional rights have been altered or changed or constrained in some sense because of this,” Mr. Rosen explained.

Eddy’s begs to differ. It has joined with other gun shops and the National Rifle Association in a lawsuit that argues local officials cannot “use a public health crisis as political cover to impose bans and restrictions on rights they do not like.”

The county created a hotline so that anyone could report lockdown violations, and the calls have come in by the thousands. “We have a ‘United Silicon Valley’ of snitches making sure that we all take this burden together,” Ms. Alvarado said with a mixture of appreciation and dark humor.

She fields yet another report about the latest cottage industry — people running barbershops out of their garages. “No one is feeling the pain more than me about not having a haircut and a pedicure,” she said, pointing to the dark brown roots of her dyed-blonde hair. “I mean look at what is happening up here.”

Far trickier, she said, was a confrontation on Easter Sunday with Southridge Church of San Jose. The church’s pastor, Micaiah Irmler, came up with the idea of inviting parishioners to celebrate in the safety of their cars at a local drive-in movie theater.

When Ms. Alvarado nixed that plan, the congregation instead arranged to distribute 500 bags of food and other items like toilet paper and homemade masks to parishioners who showed up at the drive-in. The idea was to exploit the exemption for those who provide essential services like food delivery. The fact that parishioners might hear Pastor Irmler deliver an Easter sermon over a loudspeaker was incidental. Or so the members of Southridge Church hoped.

Ms. Alvarado was not having it. She instructed the police to put an end to Pastor Irmler’s sermon to a sea of parked cars. She did make one accommodation, though: She permitted a drive-through line, so the bags of groceries could be distributed.

“These decisions are heavy,” Ms. Alvarado said, summing up her work since March. “They’re taxing.”

Katey Rusch and Casey Smith are students at the University of California, Berkeley, Graduate School of Journalism. The New York Times is collaborating with the school on coverage of the coronavirus in California.