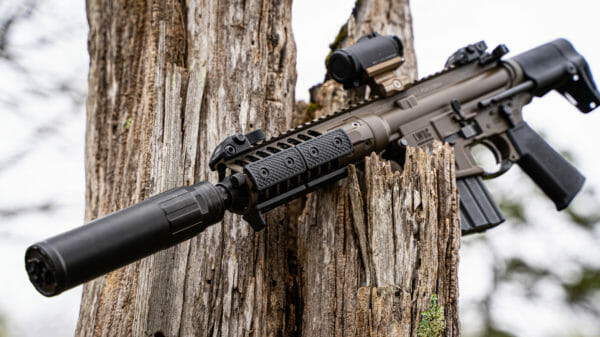 U.S.A. –-(Ammoland.com)- This is the CGS Group Helios 5.56 Suppressor, and it is quite possibly the best 5.56 suppressor ever devised for several reasons. Most 5.56 specific suppressors have some limitations by design, and for these reasons, I never recommend that a first-time suppressor buyer get a 5.56 can. Unless, 5.56 is the primary round they shoot, and really don’t care about anything else. Let’s take a look at some of these limitations and how CGS Group has tried to address them with the Helios.

First, 5.56 suppressors have to be built extremely tough; there’s nothing harder on a suppressor than really hard use 5.56 shooting. You want tough? This thing is made out of  3D printed Inconel; what exactly does that mean? It means go nuts, whatever you got it can handle it. Full auto, belt-fed, 5.56, burn it down to the point the barrel is melting; whatever you have, it just laughs and asks for more. You’d be hard-pressed to find a tougher built suppressor. CGS tested this can with belt feed 249 machine guns. They have run this thing so hard on various full auto platforms to the point that barrels were starting to melt, and the suppressor was fine through it all. Inconel is one of the best choices for suppressor materials when it comes to hard use with a lot of pressure and heat.

One of the major problems with 556 suppressors is, they’re bored out to 556, so basically that’s the only caliber they can do. You can probably do 224 Valkyrie, but for the most part, 556 is it. If 556 is your jam, then I guess that’s all you really need. If you have some other calibers though, you’re very restricted and going to need a 30 caliber suppressor for all of your other rifle calibers. CGS refers to the Helios as a 556 suppressor. Because it is built tough enough to handle all the hard use you can throw at it. But, in what I’m going to call a sheer stroke of genius, they bored the can out for 30 caliber projectiles. That means you aren’t limited to just 556 out of your 556 suppressors. You can use .308 Win, 300 Black Out, 6.5 Creed, 762 x 39, 300 Norma Magnum. Basically, if it’s 30-caliber or less you can run it through the Helios.

Another harsh fact about suppressing 556, is that it really just doesn’t suppress well. I don’t think anyone has ever heard 556 suppressed with any suppressor, and was like “damn that was nice” or “wow that was really quiet”. It’s an extremely high pressure round, it can be made hearing safe, but really cannot get what I would refer to as “quiet”. Now, you might be thinking, “well doesn’t the Helios make any sound sacrifices because of the larger bore”. We tested it side by side with the SIG SRD 556, by all accounts an excellent 556 suppressor, and everyone present felt that the Helios actually sounded better. The Helios actually sounded phenomenal across a wide range of calibers, we tested both supersonic and subsonic. When you get the Helios QD, you’ll get a very nice SKB hard case that holds the suppressor and several included accessories. The case is laid out very nicely with foam cut out to hold everything and a few open spaces for future accessories. The Helios comes with both a direct thread insert in 1/2 x 28 and 5/8 x 24 to work as a direct thread on almost any platform it is rated for. You’ll also have 2 end caps; one that will function as a traditional suppressor, and another vented end cap specifically designed to reduce backpressure in the suppressor and weapon system. This end cap will essentially give you the benefits of a flow-through suppressor. This will also give you virtually no gas to the face, potentially making your rifle more pleasant to shoot suppressed. Your rifle should also run a little cleaner with this end cap. Now, I will say that while the provided vented end cap does an amazing job eliminating backpressure, it does make the can significantly louder. Talking to CGS, there will be many new end caps coming out, and some with less or smaller holes in the end cap. I think that would be a more happy medium between lowering back pressure and providing a little more suppression.

Lastly in the case, you’ll have the QD adapter mount allowing your Helios to work with all the major mounts on the market today like Dead Air’s Keymo, JAMC Custom, Silencerco ASR, and Q Plan B, you can use the Helios with just about any mount available on the today. This is a great thing because if you’re invested in a particular company’s mounting system, you can more than likely use the Helios with that mounting system.

The Helios has an amazingly pleasant deep tone and sounds phenomenal. Mainly due to the very unique baffle stack borrowed from their Hyperion suppressor. The idea behind the baffle stack in the Helios is to immediately vent the first chamber into the perimeter of the can so that the peak pressure lowers in the first section of V-shaped baffles to help prevent erosion. Then the gases that were vented off re-combine about midway through the suppressor causing turbulence and slowing down the airflow. Then the gases that have already been slowed by that process, pass through the second type of baffle that takes advantage of the lower pressure air caused by the turbulence. All of that means that there is actually a ton of engineering and a great use of the volume of the Helios, giving you the shooter, an amazing sounding suppressor, especially given its size.

The CGS Helios is not a cheap suppressor. However, when you add up all the included accessories, both common thread pitch adapters, the adapter that allows it to use all industry common muzzle brakes, a normal end cap, one that virtually eliminates backpressure, the fact that it’s constructed from 3D printed Inconel and comes in a really nice case that you can actually use to transport it and all its accessories to and from the range, I really think that you’re getting your money’s worth.

If you use your cans extremely hard on short barrel 556 or are lucky enough to have some full-auto stuff, this is an awesome can for you, it’s more than tough enough to take whatever you can dish out. Or, if you’re just a regular guy who wants a great sounding tough can that can suppress a wide range of rifle rounds, this works great for you as well. This suppressor covers a wide range of users and applications, and I feel that CGS has another real winner in their lineup.

We conduct in-depth, unbiased reviews on firearms and accessories. We are made up of all different backgrounds to give you the best range of opinions, including military experience and gunsmith work. Be sure to check out our Facebook and Instagram.

Unlike many channels out there, we make it a priority to respond to your comments. We enjoy engaging with our followers, and will gladly answer any reasonable questions you may have.